I had a new friend moving around my campsite when I packed up in the morning. The deer seemed to be not afraid at all and snuffed around while I was getting ready. 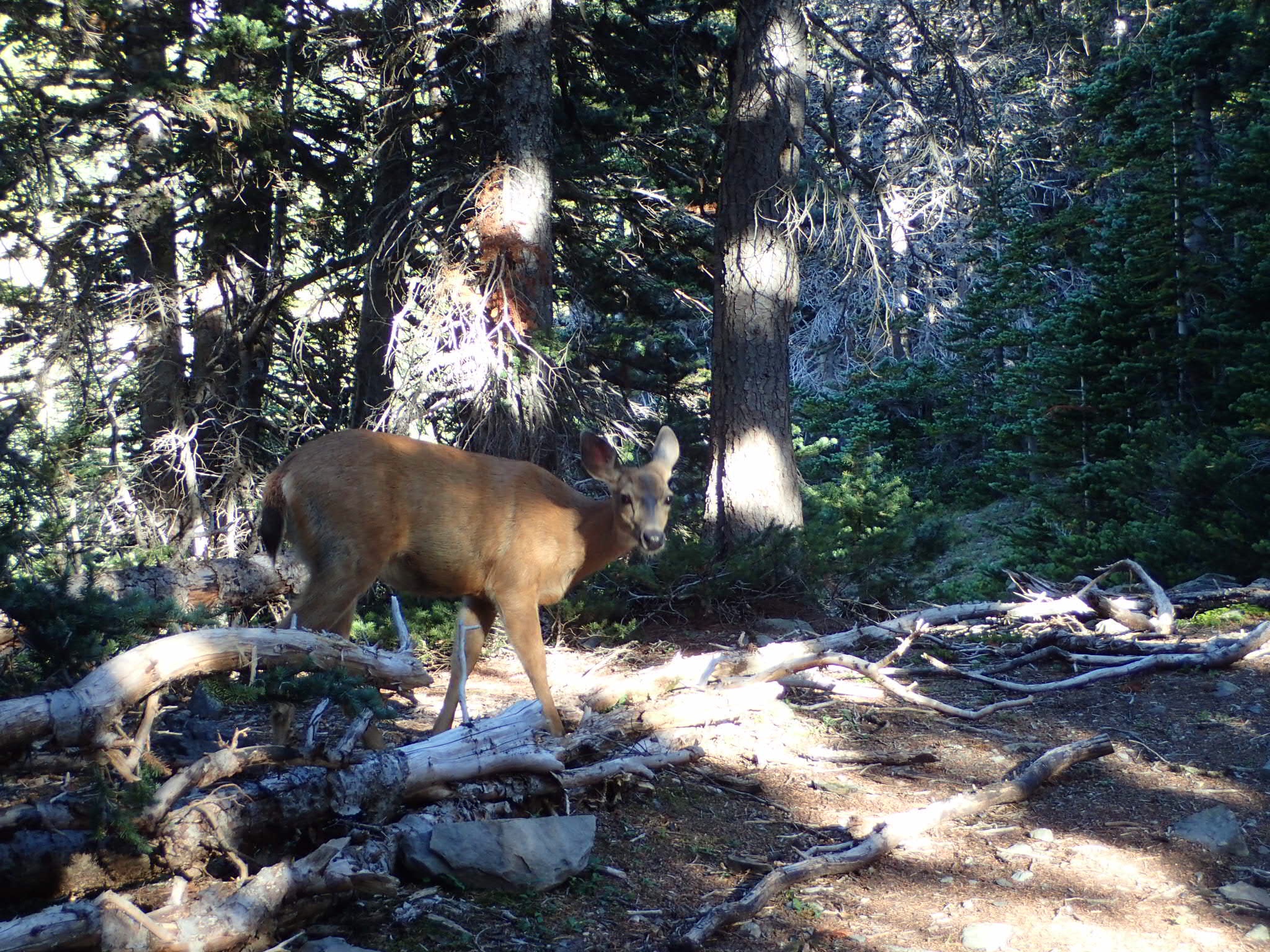 I hit the trail past eight which was maybe already way too late for the amount of miles I had planned. My next dedicated camp spot Elkhorn was more than 23 miles away. Somehow I already had some doubts about my planning. 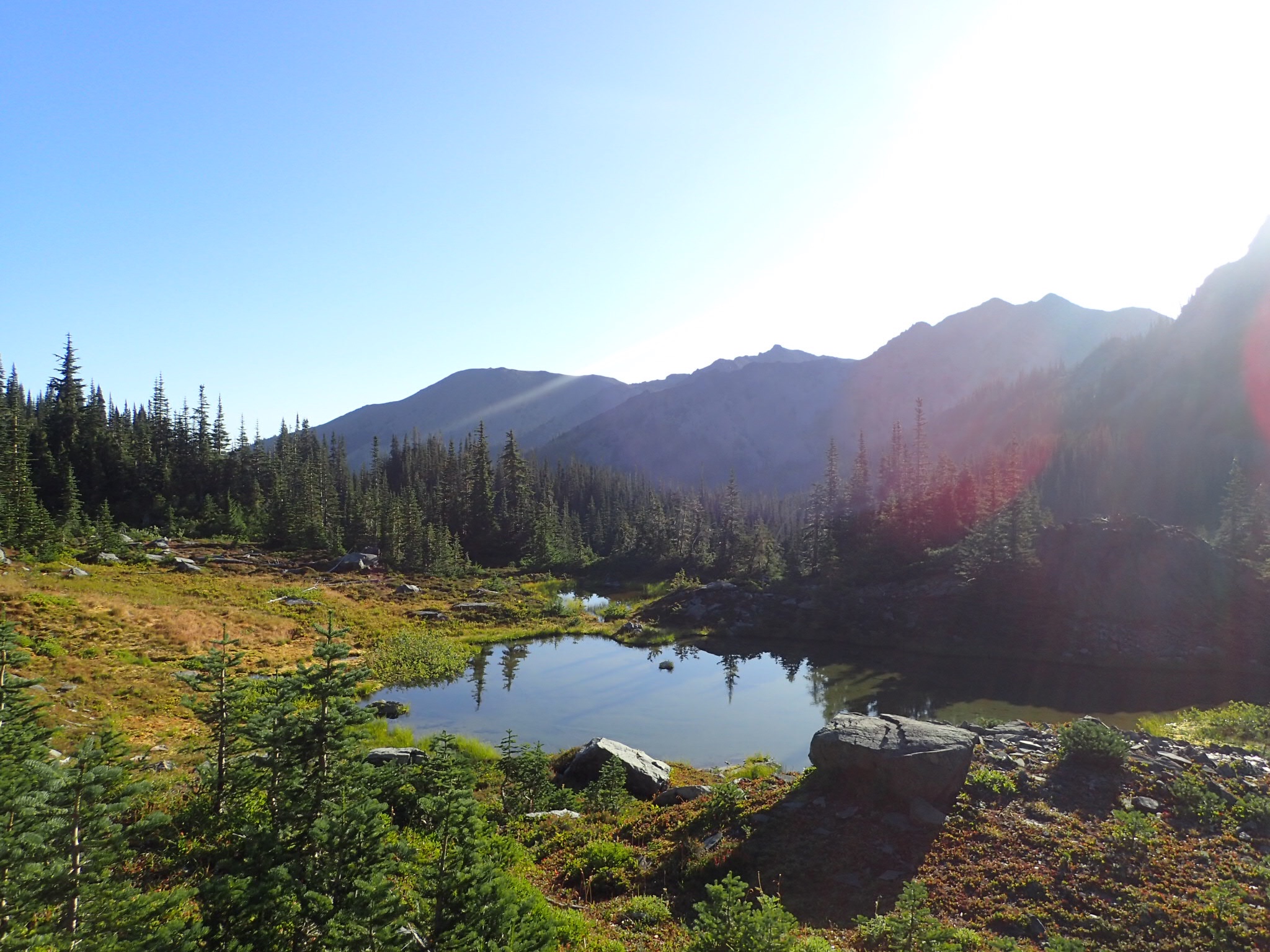 From Gladys Lake I started hiking uphill towards Grand Pass. As the name tells you Grand Pass is big and so was the climb. I even passed some snowfields on my way up! Overall it wasn’t too easy to get up as the top of the pass was kind of exposed with steep mountainsides. 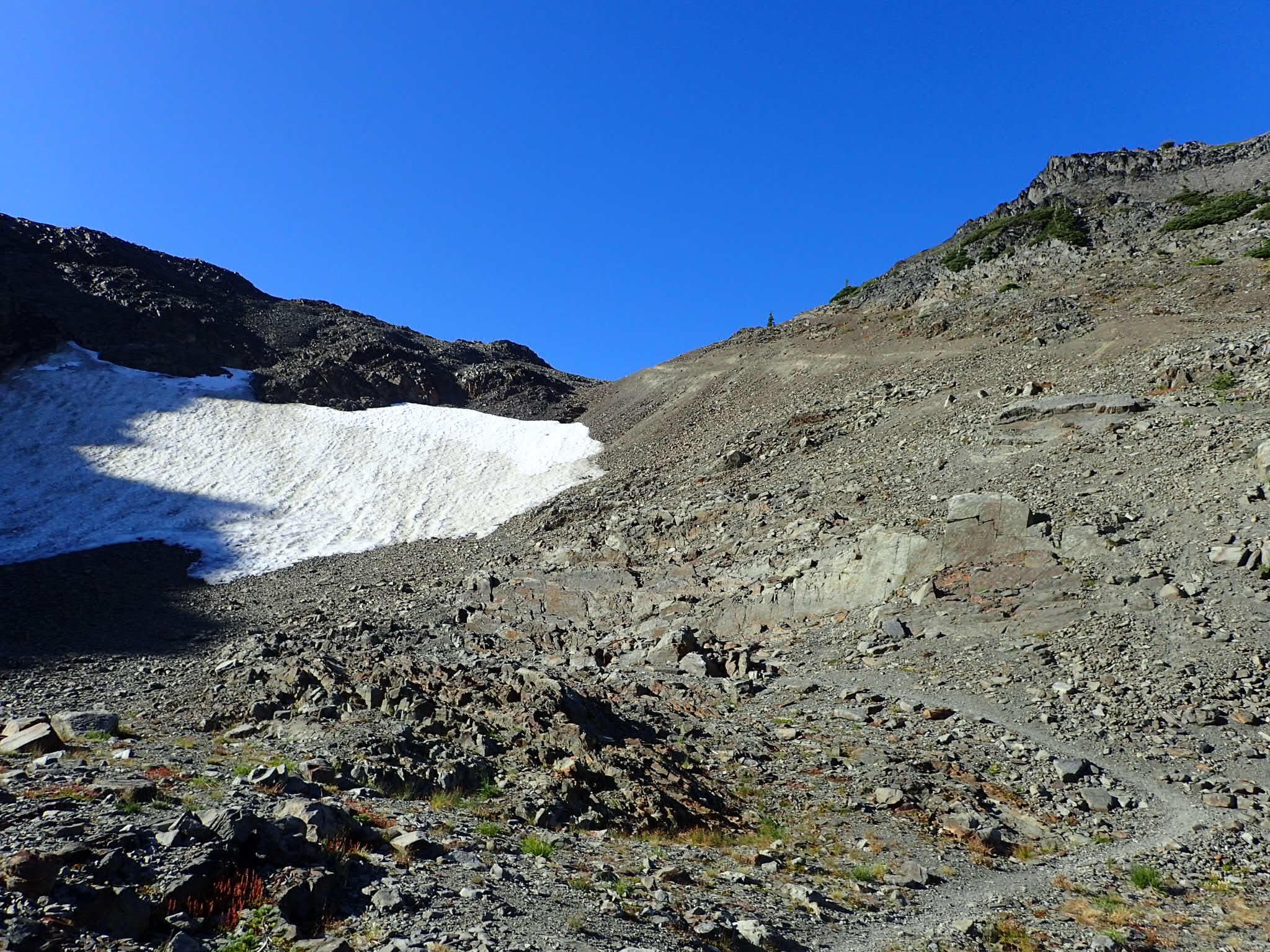 But as soon as I was up I forgot about all the effort and enjoyed some incredible views. 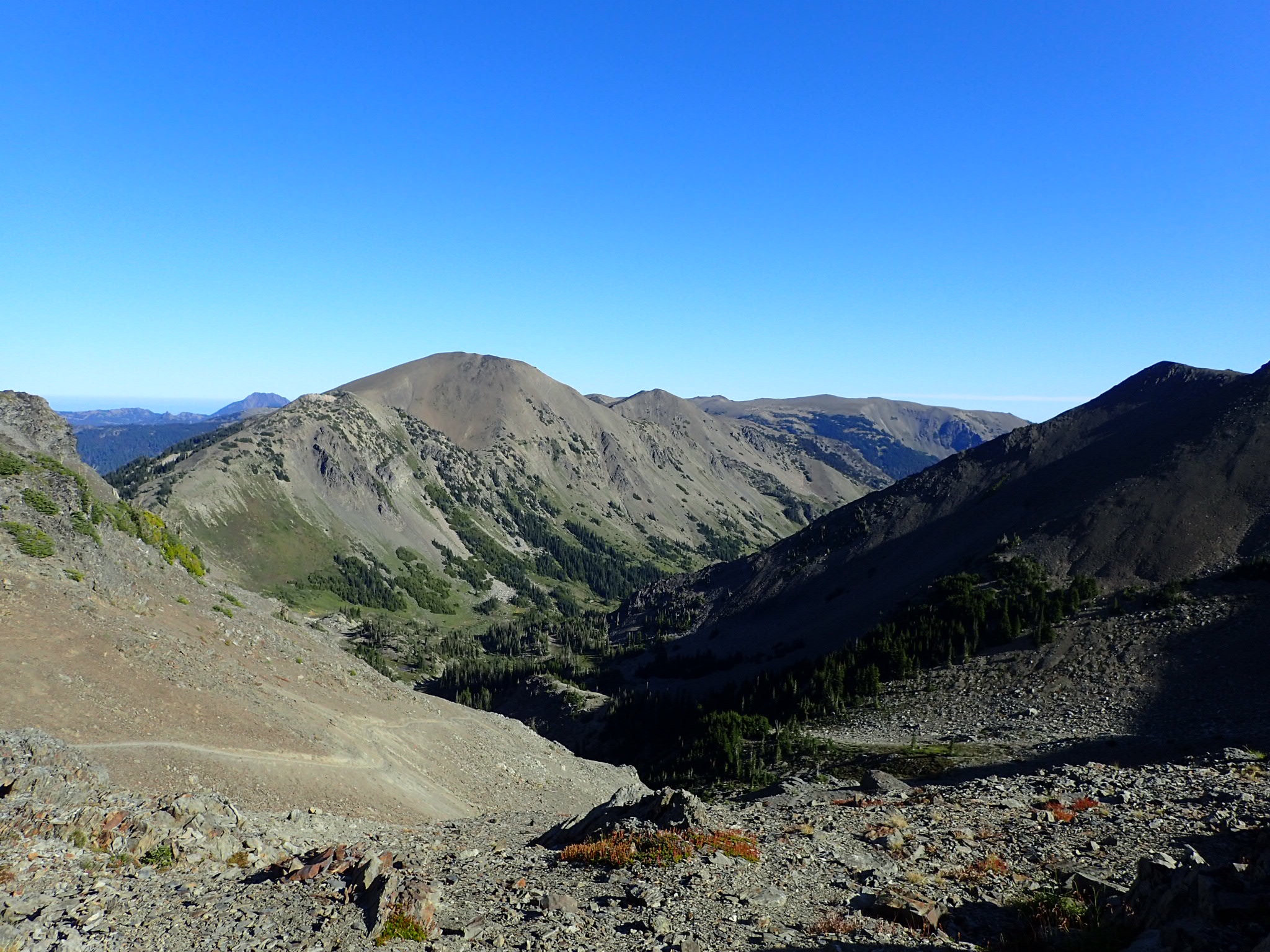 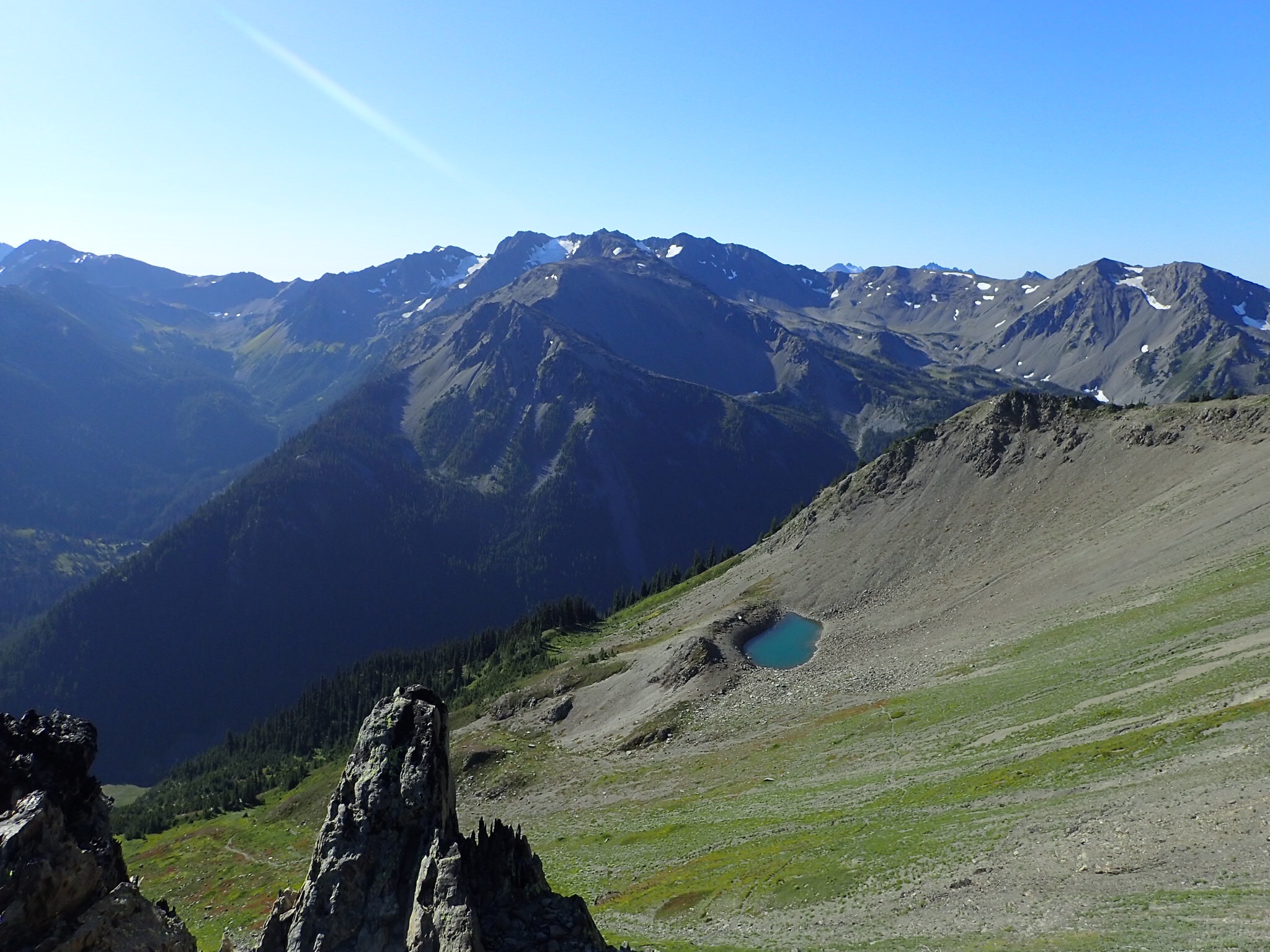 Time for the downhill! The trail went along the mountain side and was fairly steep at times. I am not good with steep drop offs and a good chance to fall down. I was very slow in the first part of the descent making sure every step was save. Eventually the trail started switchbacking through a forest. Much better! I met a total of three Rangers making their way up to the pass. So I could show my permit and hadn’t bought it for nothing. 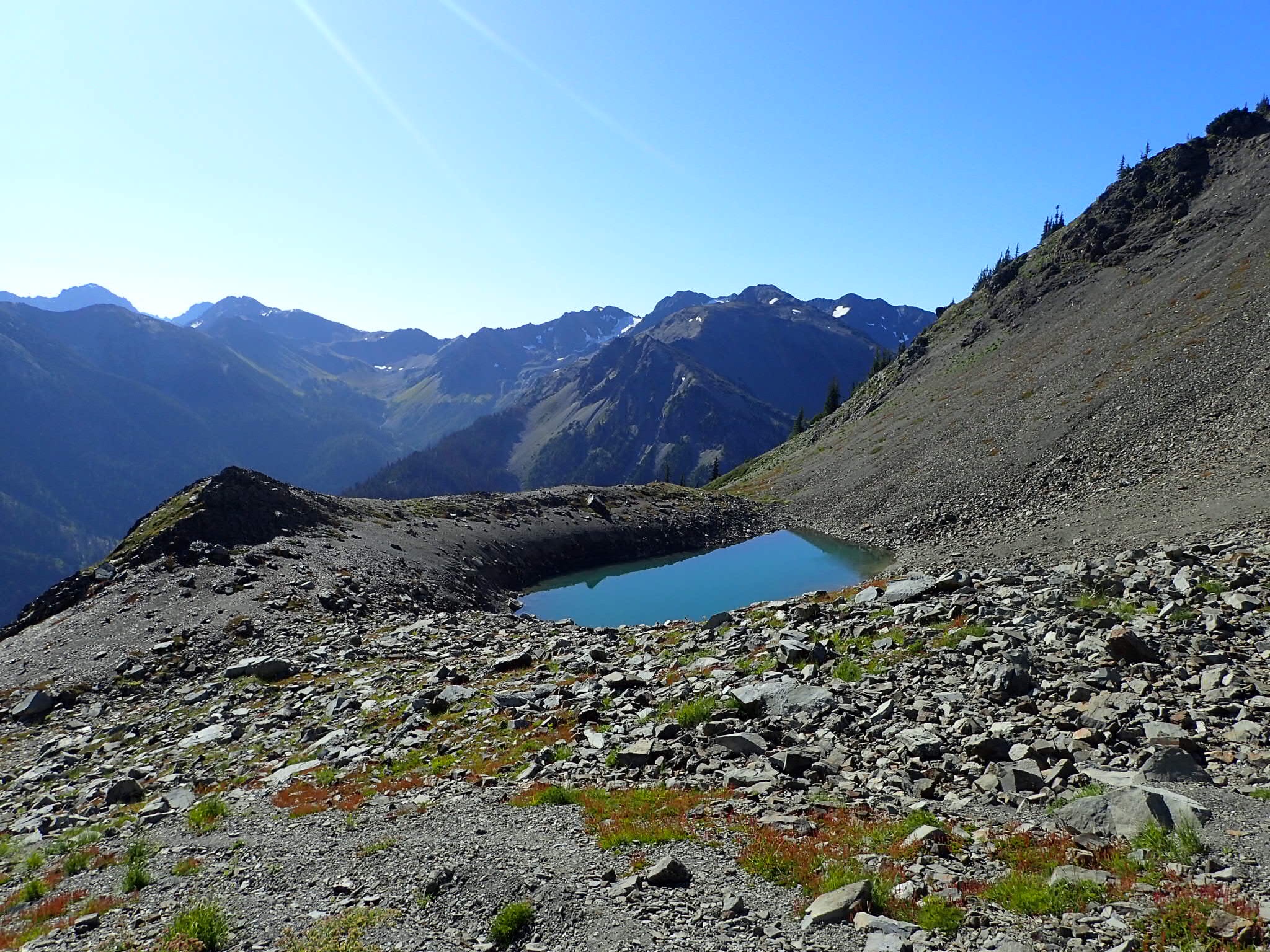 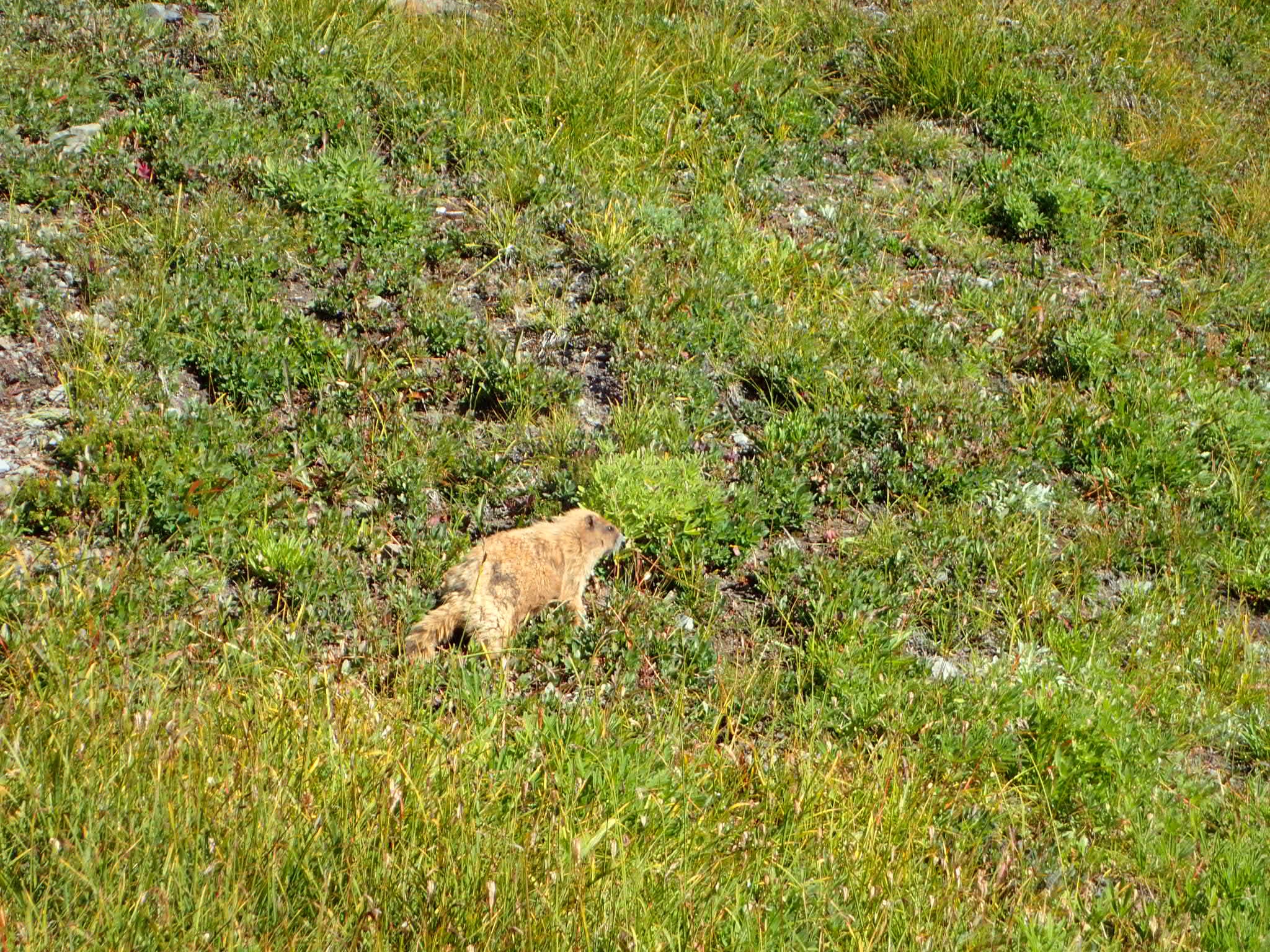 After the switchbacks the trail went through a valley and along Cameron Creek. My direction of travel changed into uphill again. I was breathing hard and gained elevation fast again. After a while of the usual PNT-like trail with lots of brush on the sides the terrain around me got more alpine again. I climbed up on an alpine plateau and for the first time today the trail went flat for a while. The plateau was beautiful! A nice alpine meadow divided by a small stream, nice pine trees around… 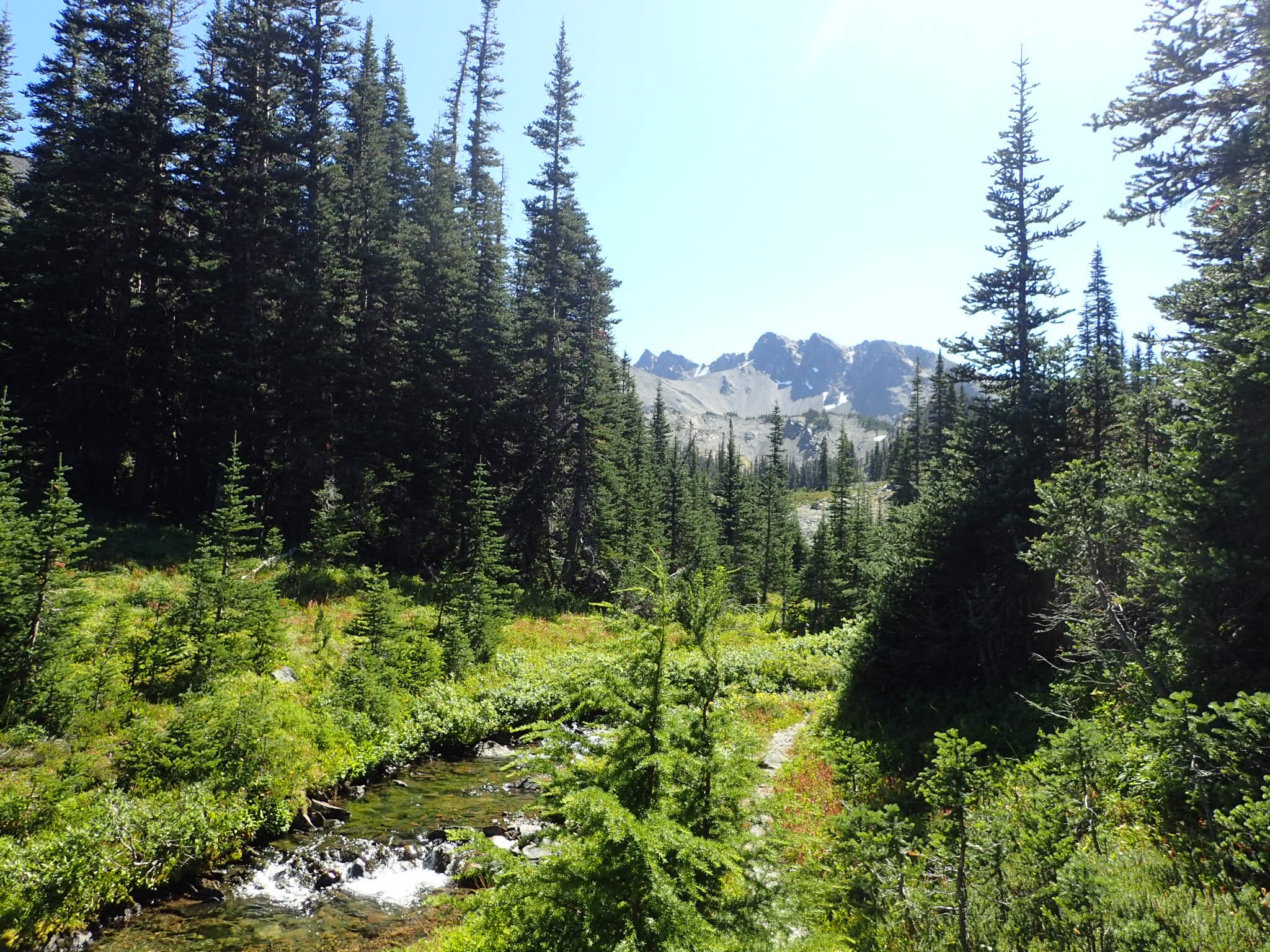 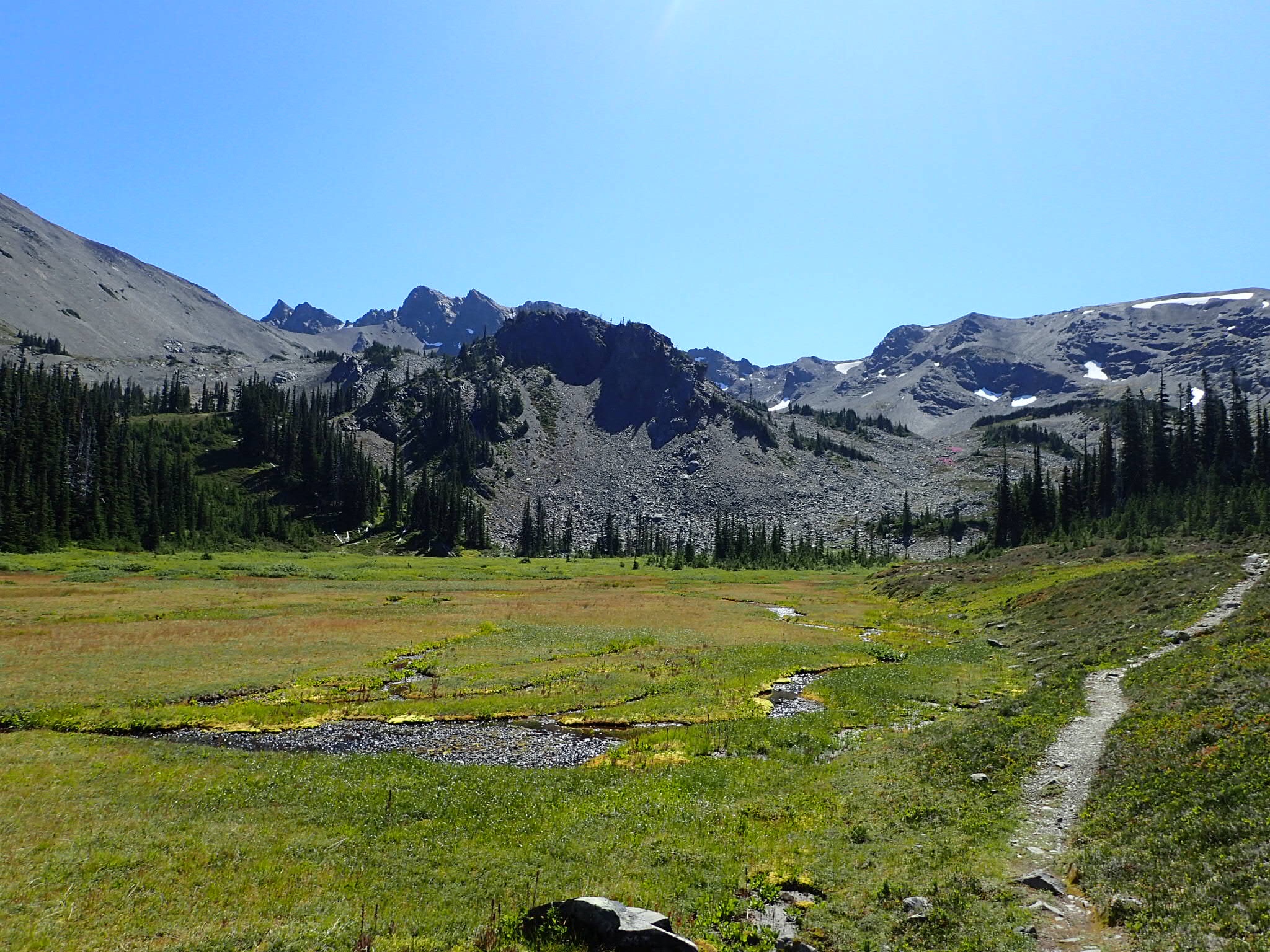 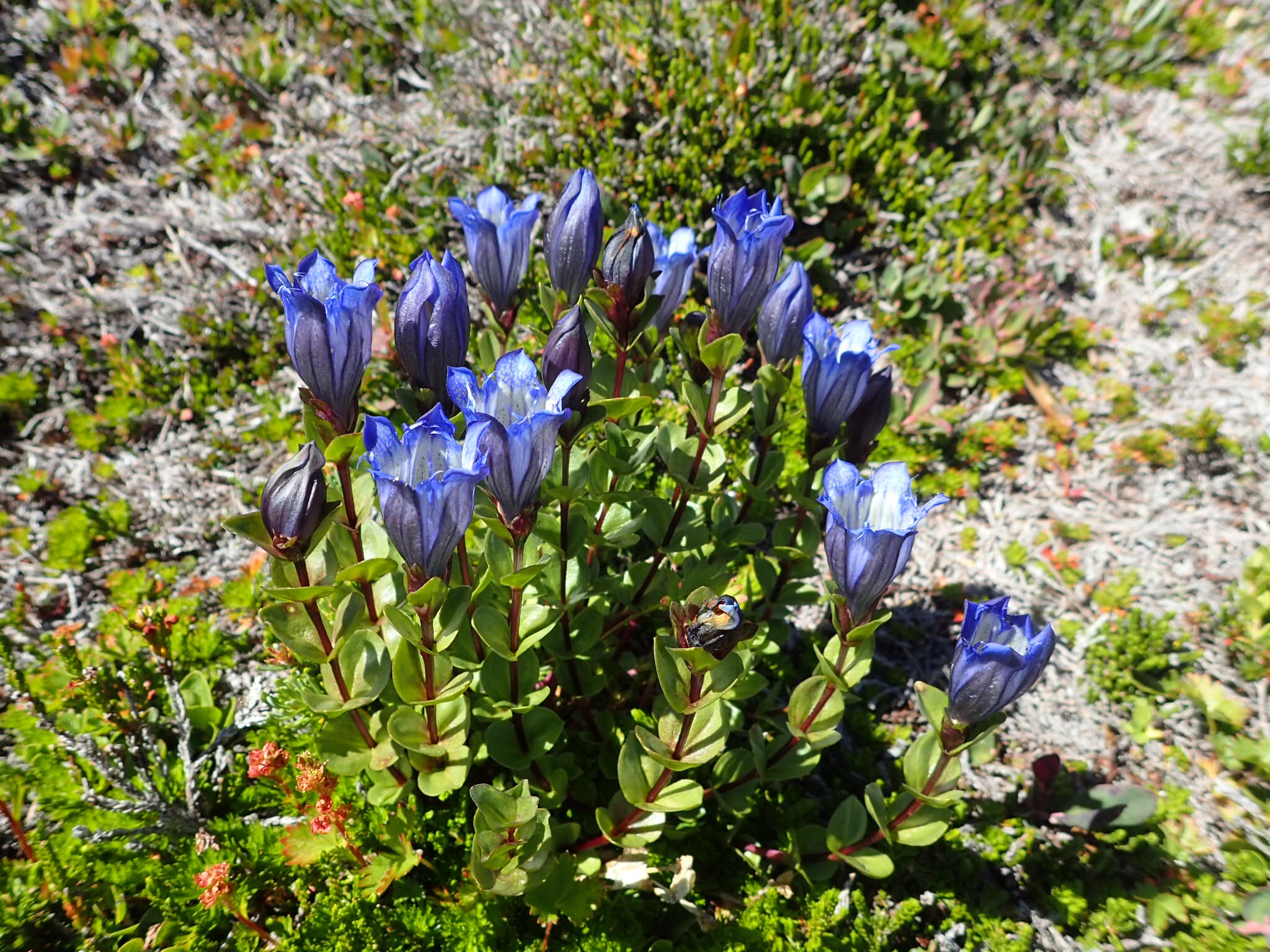 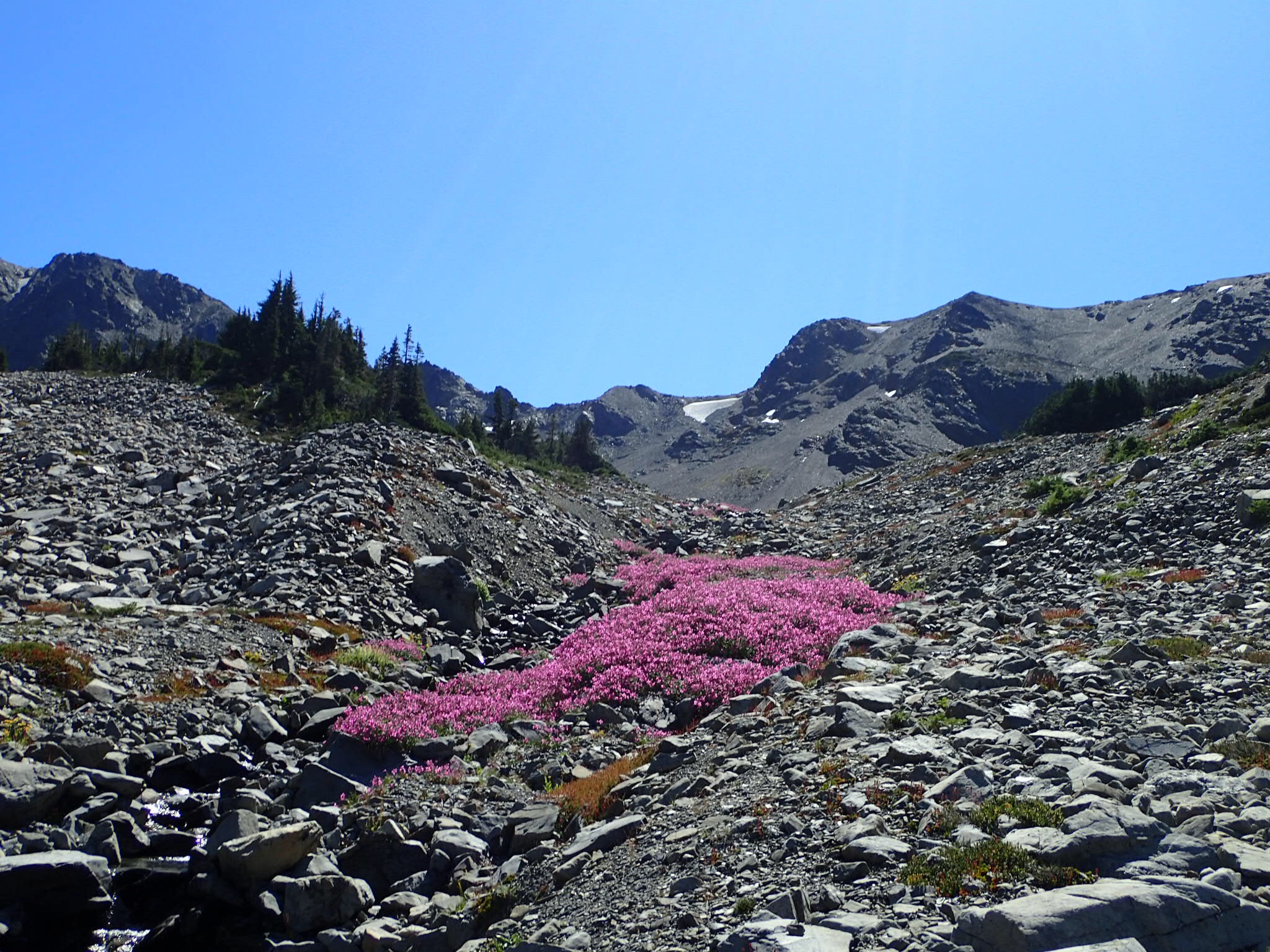 I enjoyed this section of trail a lot. Way too soon I was facing the towering rock wall of Cameron Pass. I had to climb up again. 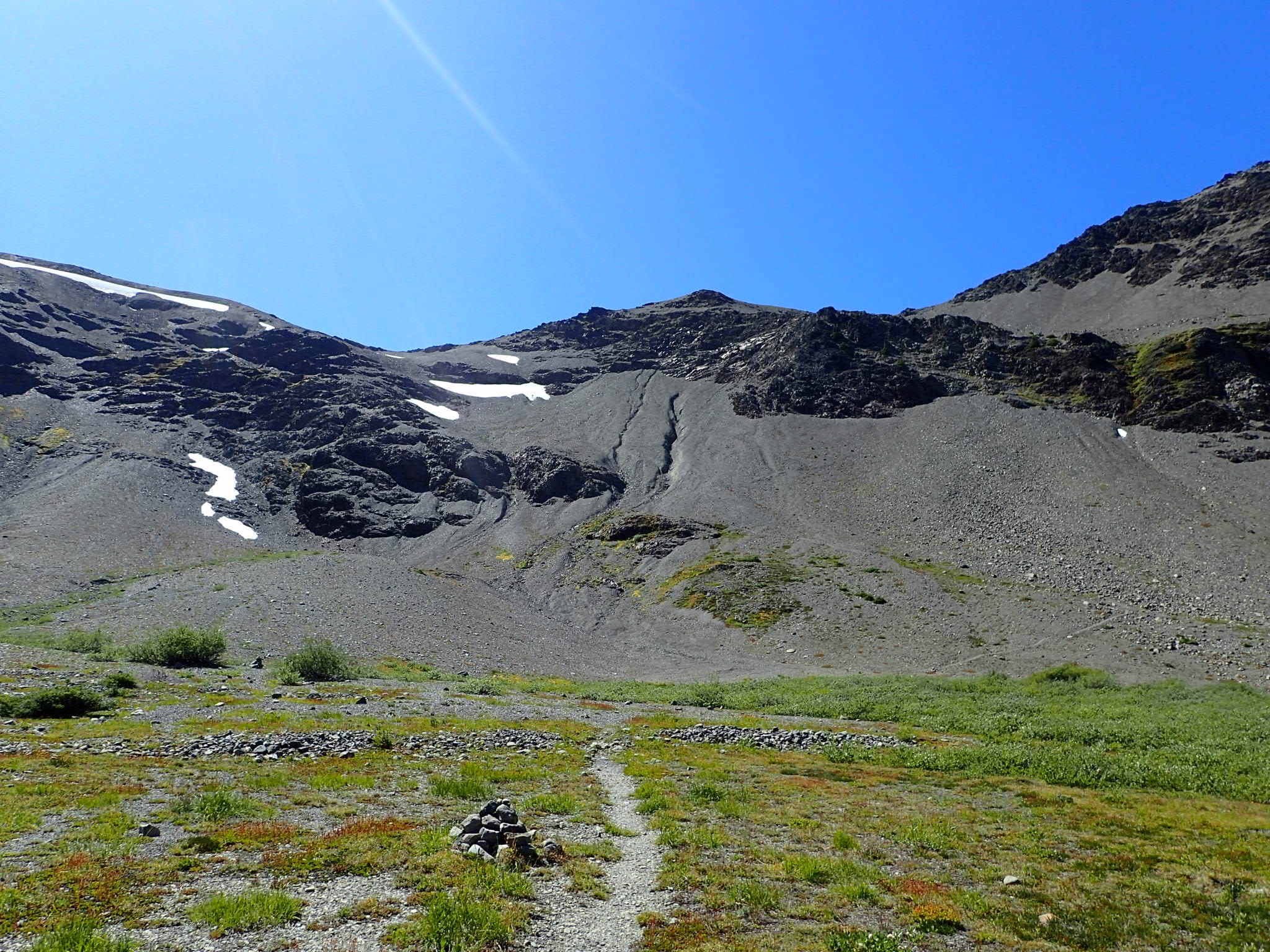 The trail switchbacked up on scree- I think that’s the right word for the flat gravel – and I had to shift my weight forward again to increase traction and not fall off the mountain. One time I was climbing frontal up and it felt a bit like going up on snow as I was digging into the gravel with my shoes and poles. In places it was a bit too steep with a bad run out and I tried to get up the pass as quick as I could. Climbing up next to a late season snowfield I fought down the last meters. Then I was up on the pass. I dropped my pack at a stone pile and sat down for a late lunch break. It was already 2 pm and I was tired as hell. No need to say I wouldn’t do 20 miles today. 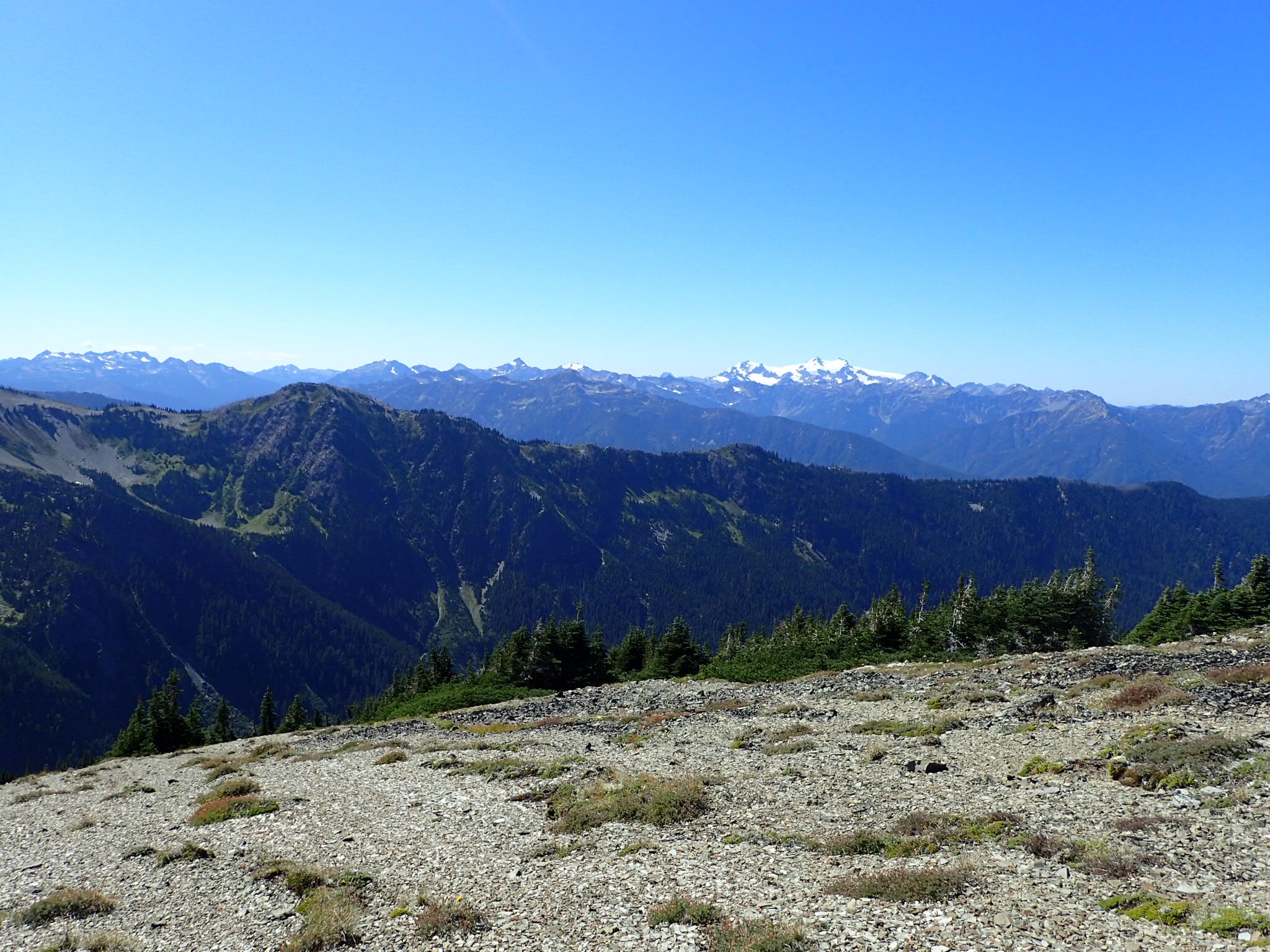 Looking at all the mountains and how I felt on the climbs and descents a new plan formed in my head. I might be able to do Lost Pass as well today but more than that? Maybe not. There was a campsite at the end of the Alternate where I would get back onto the primary route. I would be behind schedule and need another day for this section. I thought about options and it came to my mind that I could just go from Port Angeles to Forks and do the section on the Wilderness Coast. By doing that I would miss out on climbing Appleton Pass which was not too bad for me and also the Hoh River Trail. Well…

I started hiking down from Cameron Pass. The downhill was okay but still steep enough to ask for my full leg strength and concentration. It wasn’t easy hiking at all. Further down the trail flattened off a bit before I climbed up Lost Pass – the only pleasant climb today. Short and without steep sections. 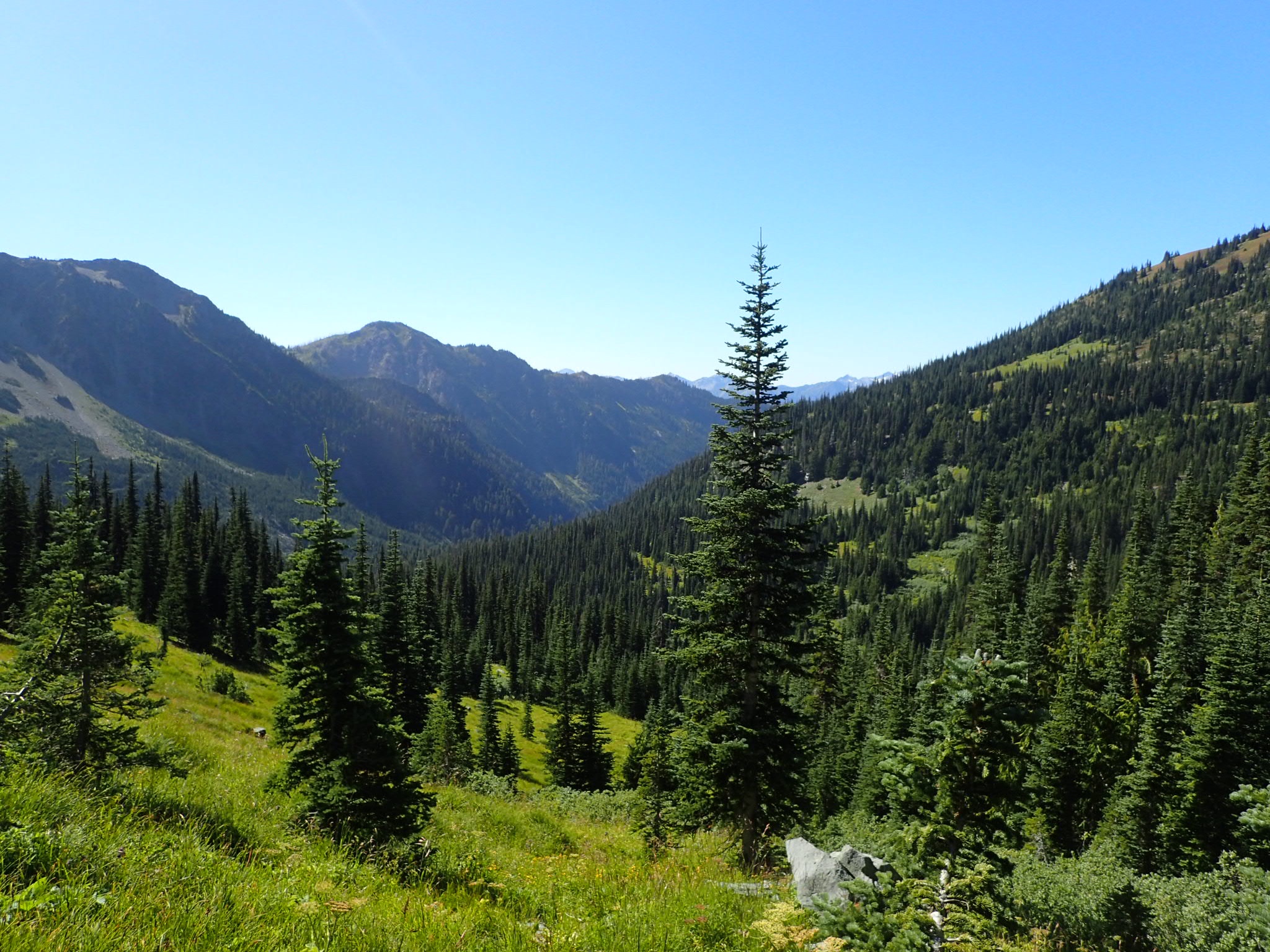 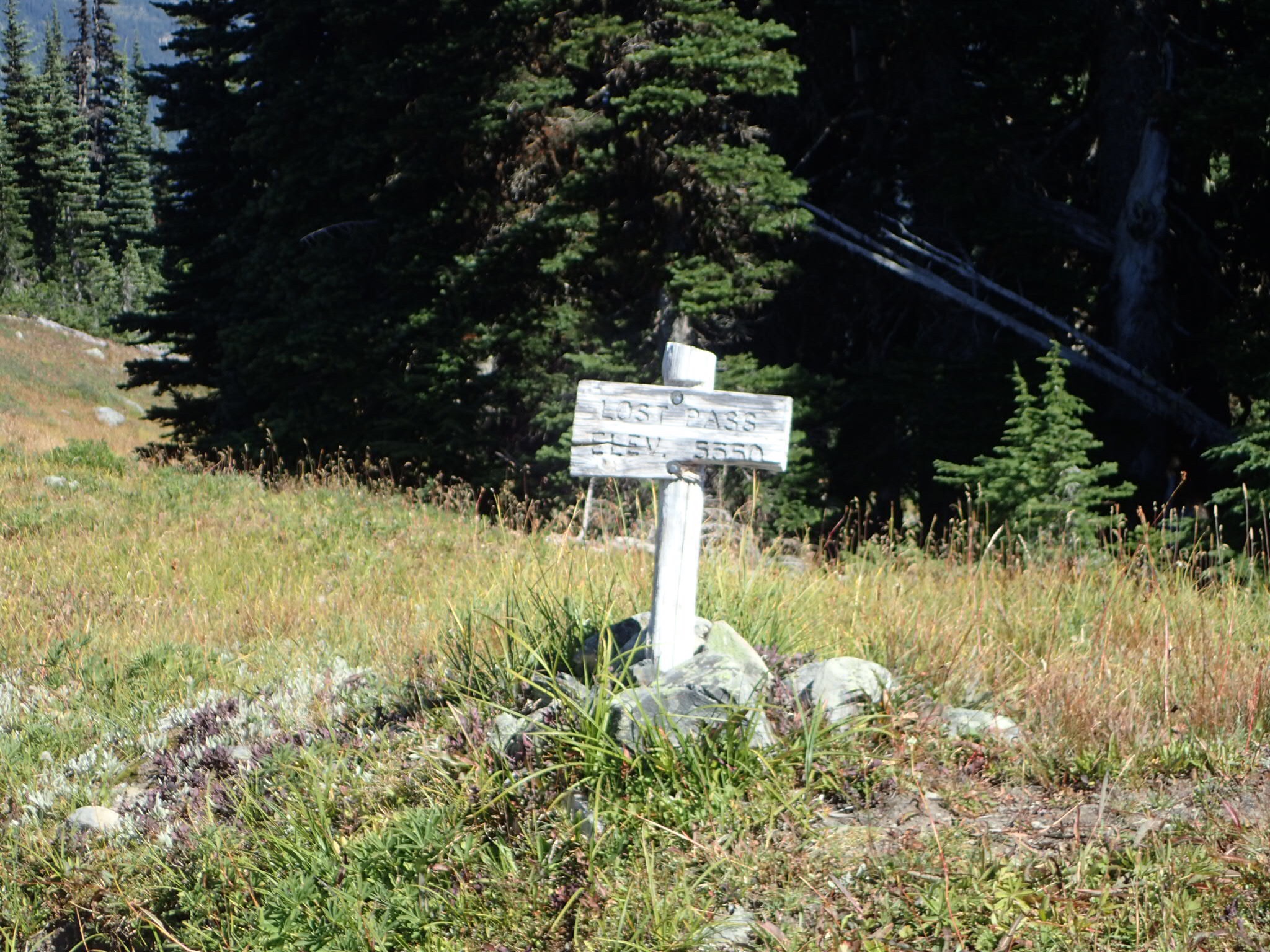 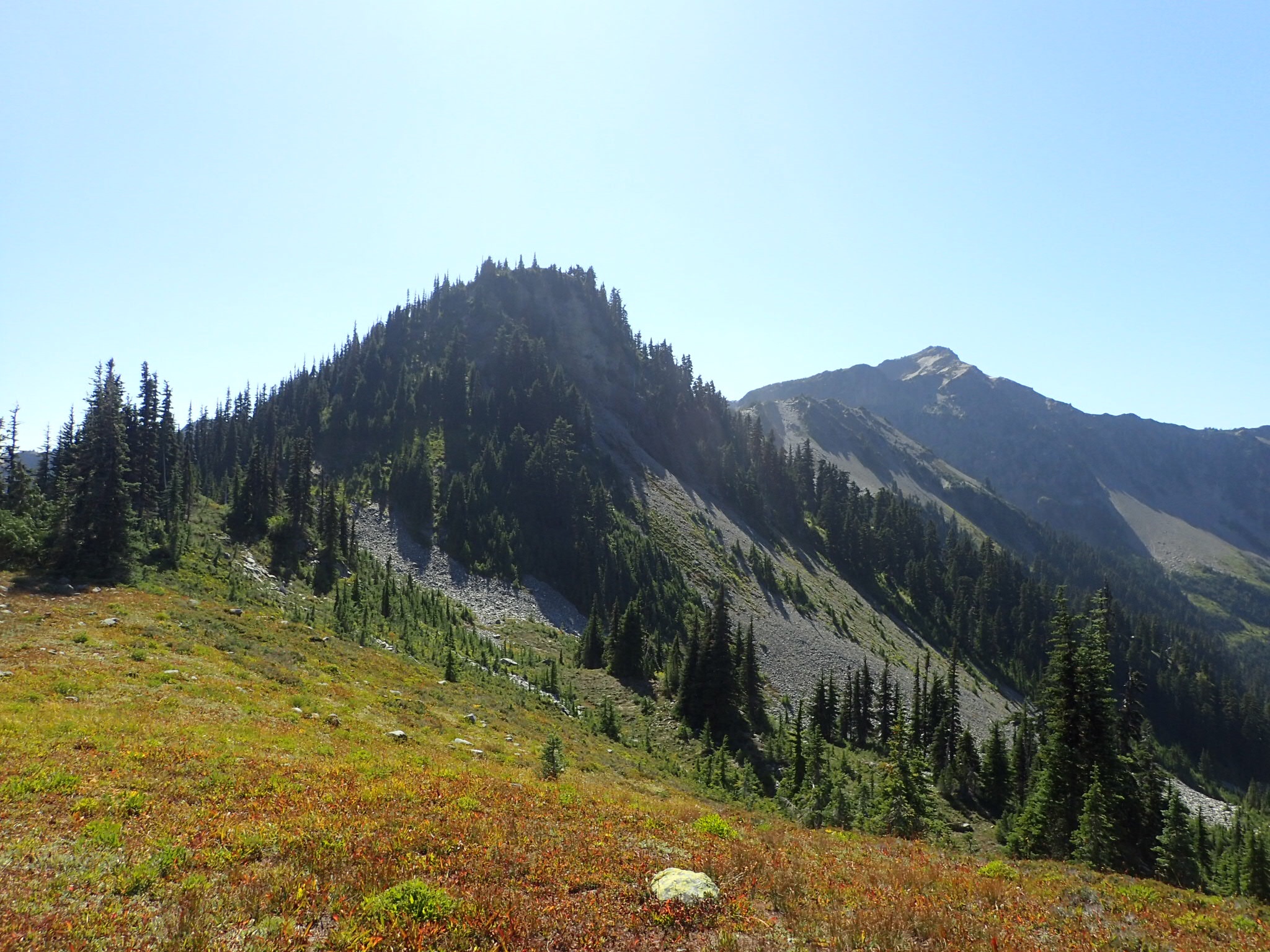 Still it was pretty around me as I sat down for another break on the pass. There was no need to hurry asI had decided to camp down in the valley and climb Hayden Pass tomorrow. There was no way I could climb another pass today!

As pleasant as the uphill towards Lost Pass was as unpleasant was the downhill from there. The only plus was that the steep downhill went through a forest and the trees somehow mellowed the steep mountain side. Other than that I once again had to fully concentrate and work in every step.

I was tired when I finally arrived Dose Meadow Camp. It was 4:30 and I had enough time to check out the different campsites. I set up camp and was surprised that no one else was here. I had just started to prepare dinner when Nate arrived. He was out for a few days to climb some mountains. Dose Meadows would be his base camp. We were chatting when another PNT hiker showed up. It was Adventure Muffin – the guy I had met at trail angel Greg’s place.

I sat together with Nate for dinner and traded some chocolate powder for some hot water and so we enjoyed a hot chocolate together. It was nice to have some company again and listen to his story.

Now I am lying in my sleeping bag and it feels like the night will get cold again. I can hear the water from the nearby creek and might have to use earplugs for sleeping. My plan for tomorrow is to climb over Hayden Pass and then just hike as far as I can on the other side. There are enough campsites to choose from and I already messed up my schedule and my permits. The day after I would then hike to the Ranger Station and towards Highway 101 to catch a ride to Port Angeles. Hopefully things would work out this way. It was a bummer to not be on schedule but I had to react to my own poor planning and actually it wasn’t too bad. I was looking forward to some shorter hiking days without too much pressure! 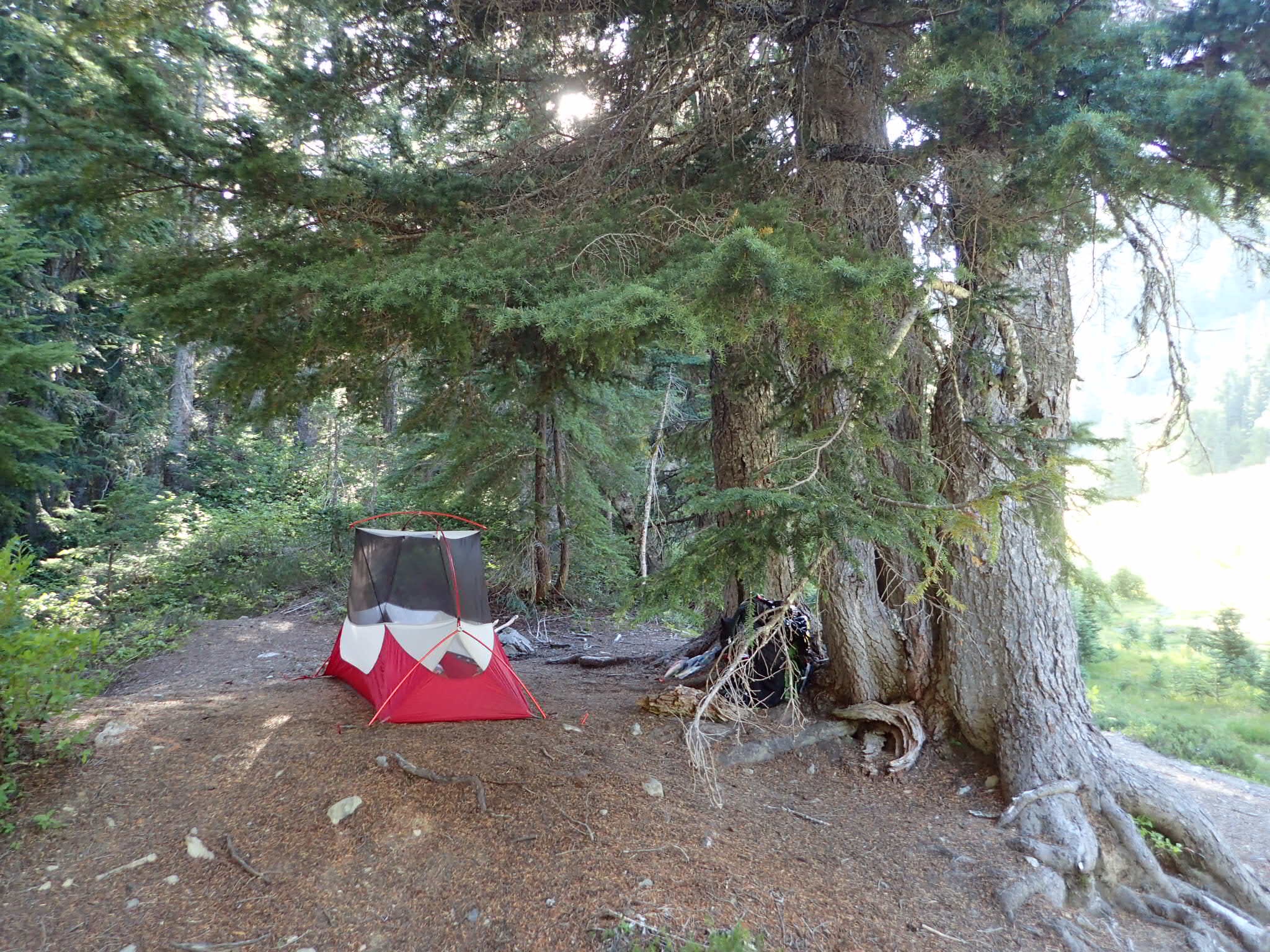 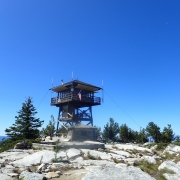 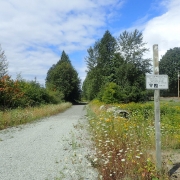 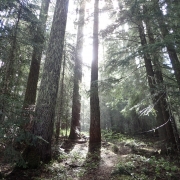