Some pain in my left knee made me wake up in the middle of the night. It felt like an upcoming problem and I immediately thought about taking some Ibuprofen. But I decided against it as I didn’t want to mask the problem. Very soon I went to sleep again.

I woke up around 6 am after another night with my tent set up at an angle. This time my head was a bit too much down and I felt like sliding all night. The pain in my knee was still existent. Now I took some Ibuprofen and switched my kneebrace from right to left. Hopefully I would get no further problems on the upcoming difficult snowy sections.

The others started to get ready as well. It was the four of us: Marlin, Salsa, Tables and me. My socks and shoes were still wet from the snow travel the day before and I tried to get most of my stuff inside the tent done. At some stage I had to go out anyway… I packed up, had some cereals for a quick breakfast and followed the others up the trail and to a marginal stream where we got our water and which we had to cross. I managed to do that without getting my feet even wetter in the ice cold water.

We hiked along the side of the mountain towards Fullers Ridge. After some descending the trail got snow free and we took our microspikes off. I was wondering how bad Fuller Ridge could get. One of the latest comments on the Guthook app (the navigation app every hiker uses) told us that we had to expect some sketchy sections. It wasn’t too bad at all when we entered the Ridge. Snow only lingered on the north side where we would eventually switch to. It was doable with microspikes and being in the trees the run-outs didn’t seem that bad to me. Of course sliding and postholing would be a bad idea and there was room for lots of injuries. But with considerable steps and enough care everyone of us was totally fine. 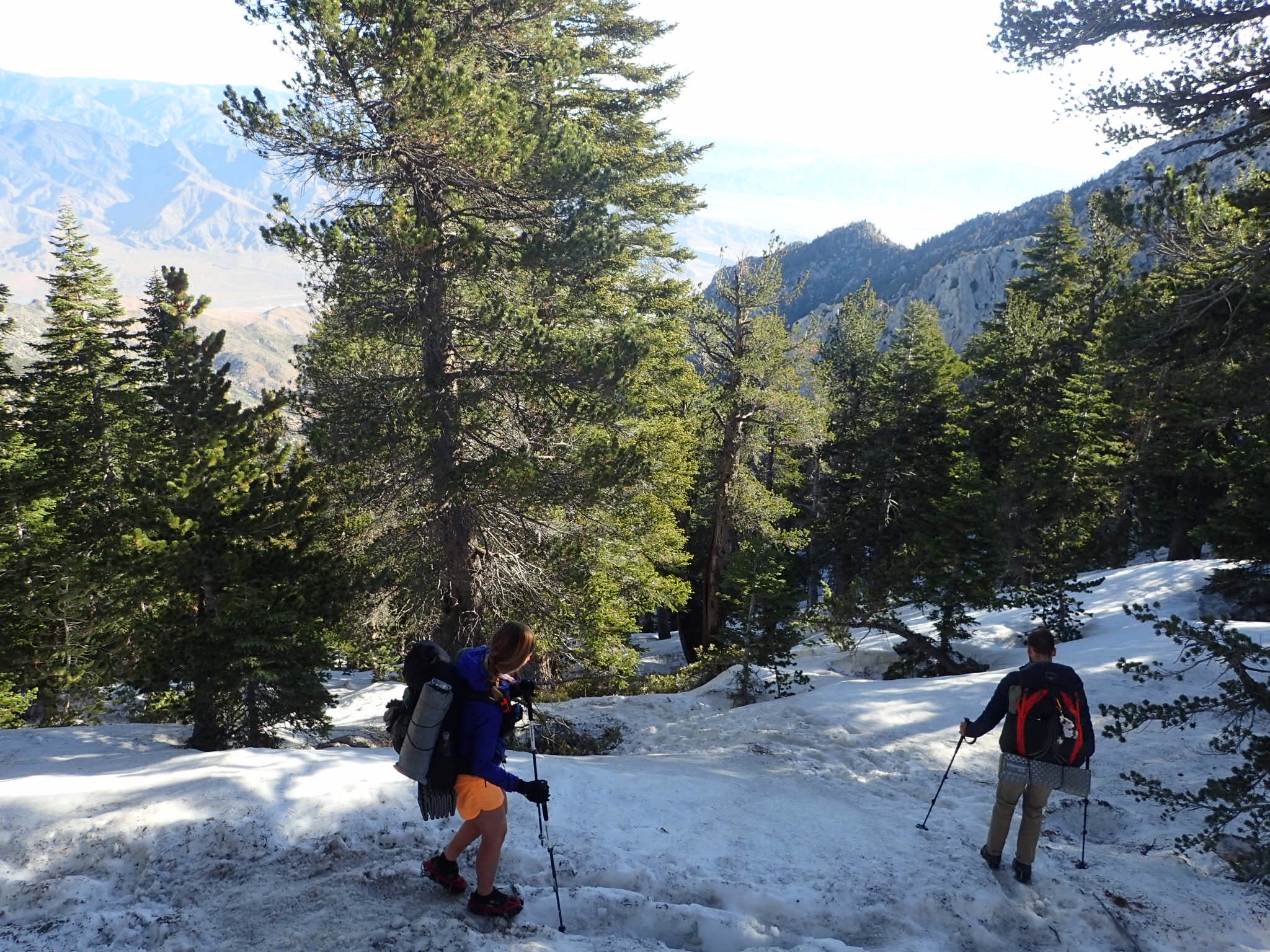 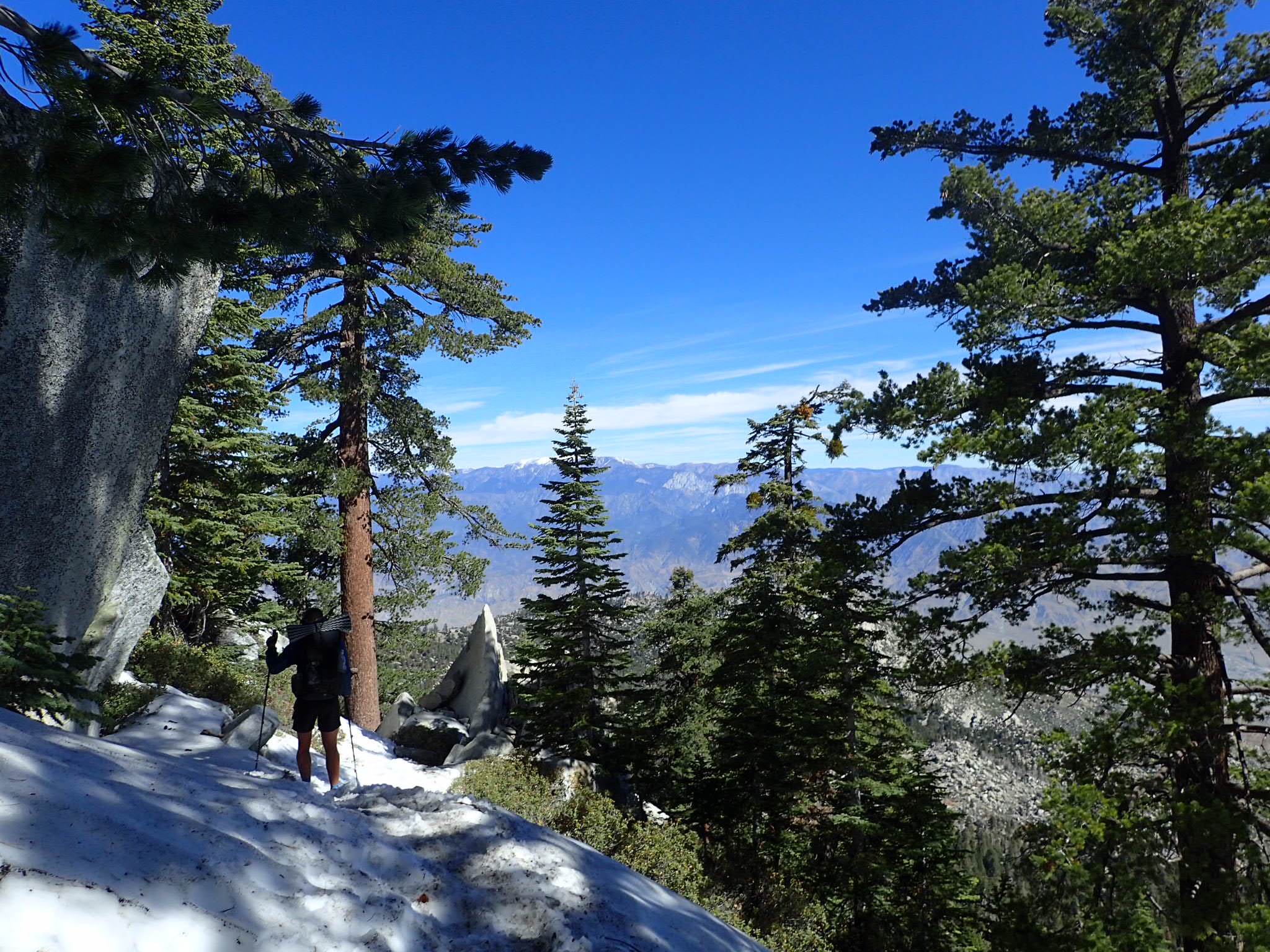 We reached the big campground at the trailhead of Fuller Ridge for an early lunch and relaxed in the sun. At trailheads, campsites, springs always some hikers hung out together. Did I already mention that the trail is crowded?

From the campground we started the big descend for more than 20 miles down to Interstate 10. It took only a few switchbacks of downhill until the temperature rose significantly. I realized that I was back in the desert. Our group of four had split up and everyone was hiking at his or her own pace. 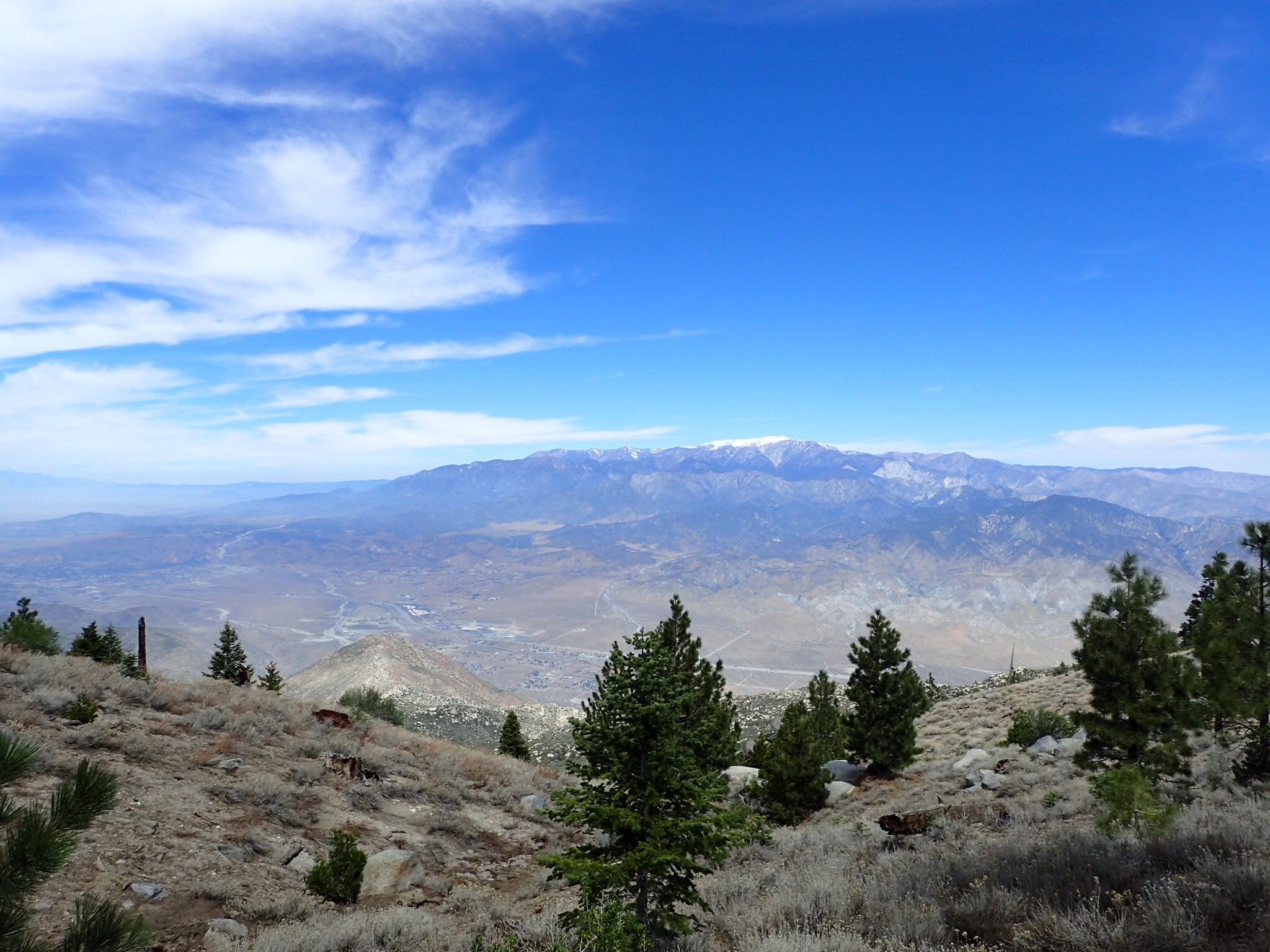 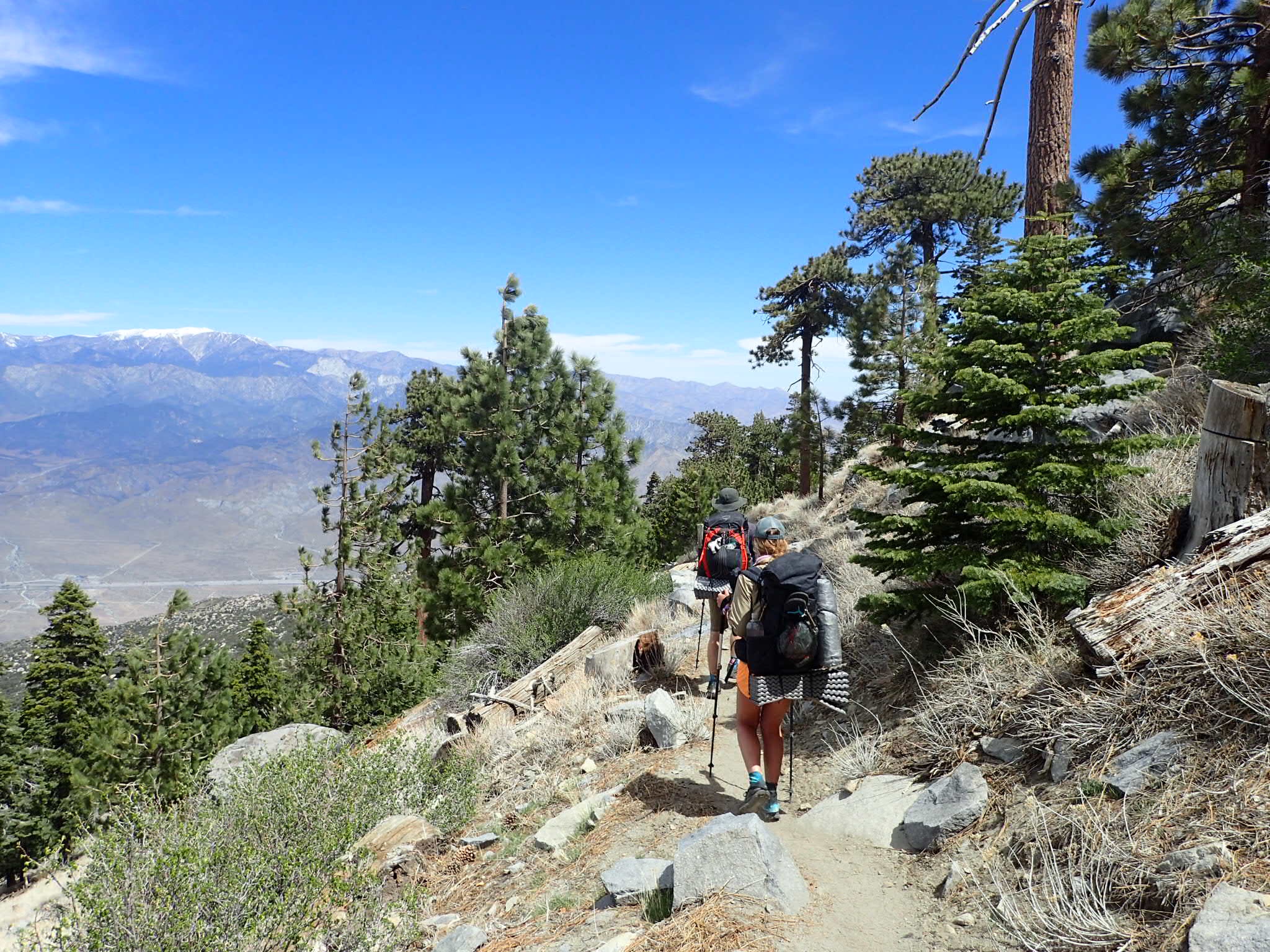 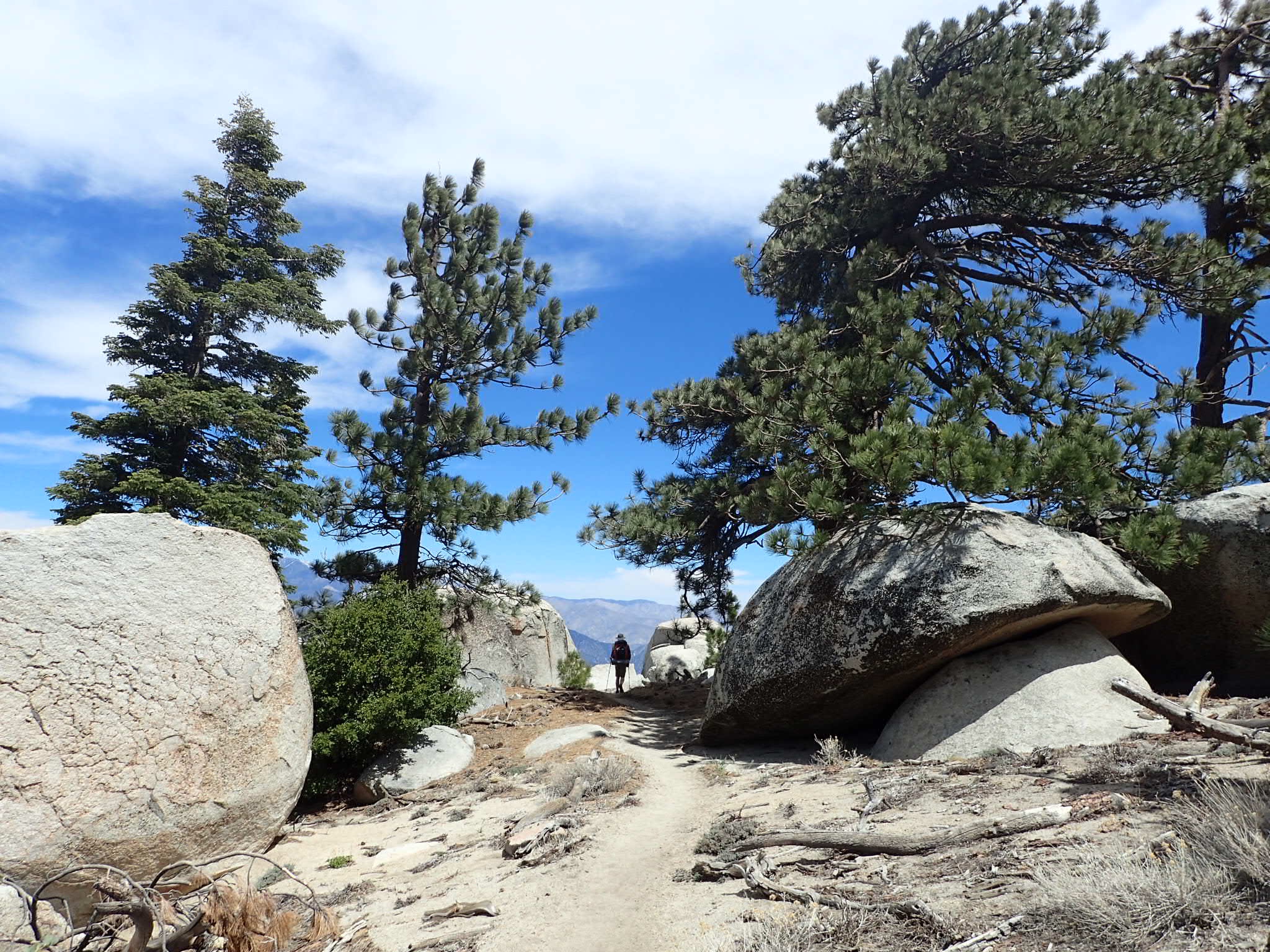 I enjoyed being by myself again. The hiking was easy, the views were great and I could stop here and there for the occasional photo. Later in the day the impressive views of Mount San Gorgonio in the distance and San Jacinto nearby gave way to some beautiful desert flowers. I had to shoot them all! 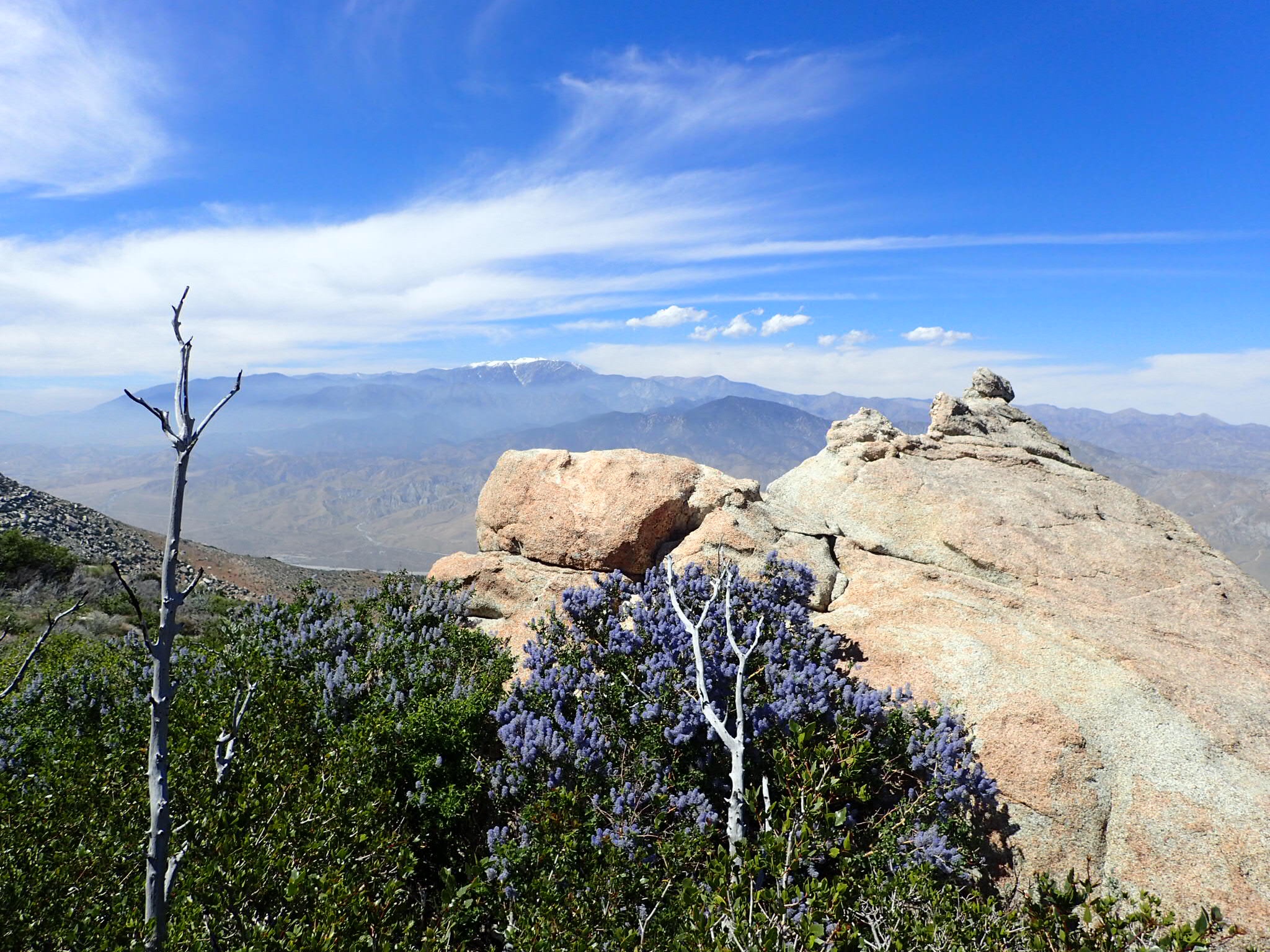 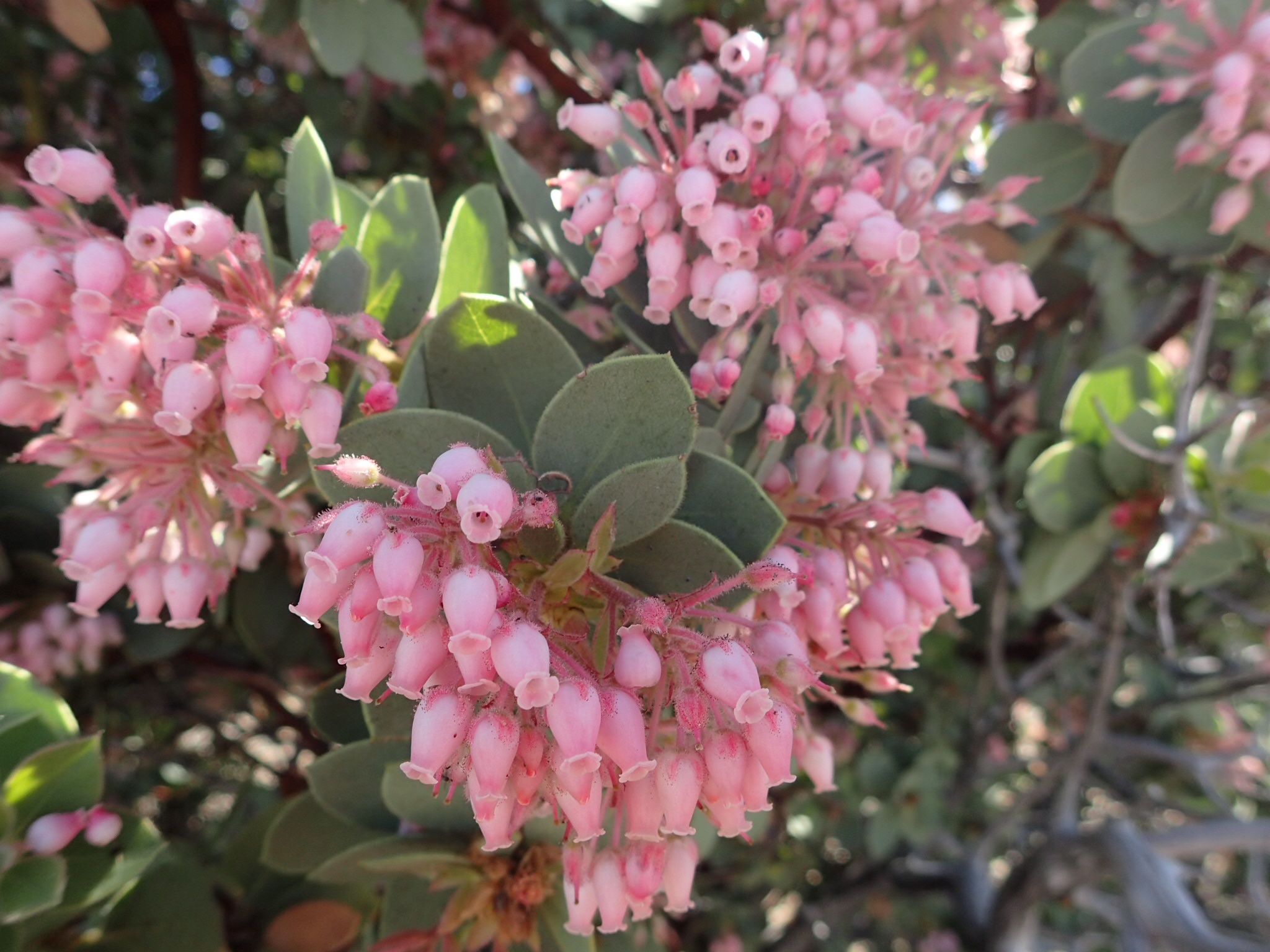 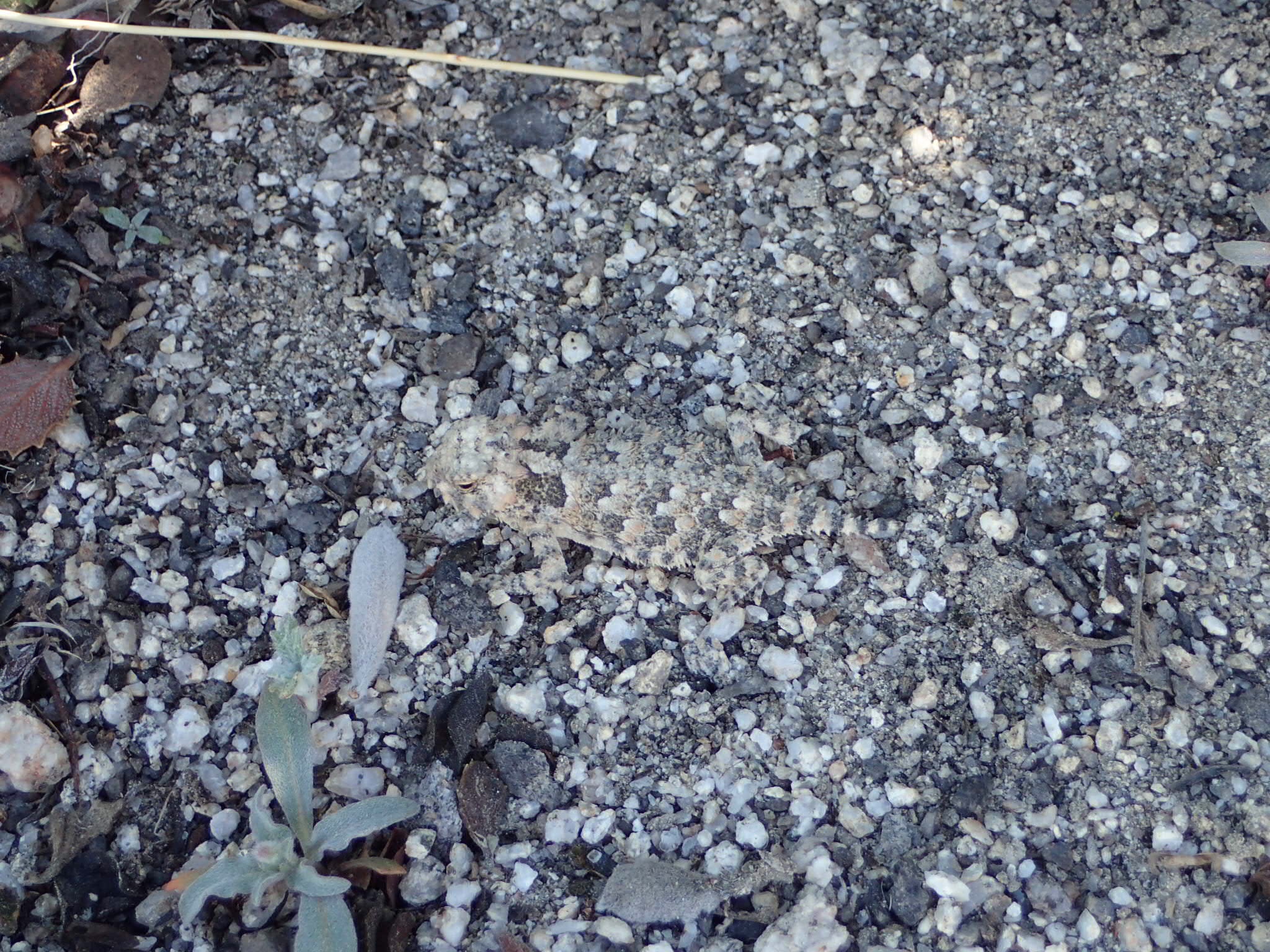 My plan was to hike half of the descend today and leave half of it for tomorrow. I tried to get that together with the limited watersources and filled up at a spring short after the 200 mile marker. There should be a campsite coming up after the spring. And indeed an already impressive number of tents showed me where I could find a spot. As the tentsite situation wouldn’t be any different somewhere else I squeezed in and pitched my tent in an unsheltered windy spot. But you know what? The angle I lie at is just about perfect! 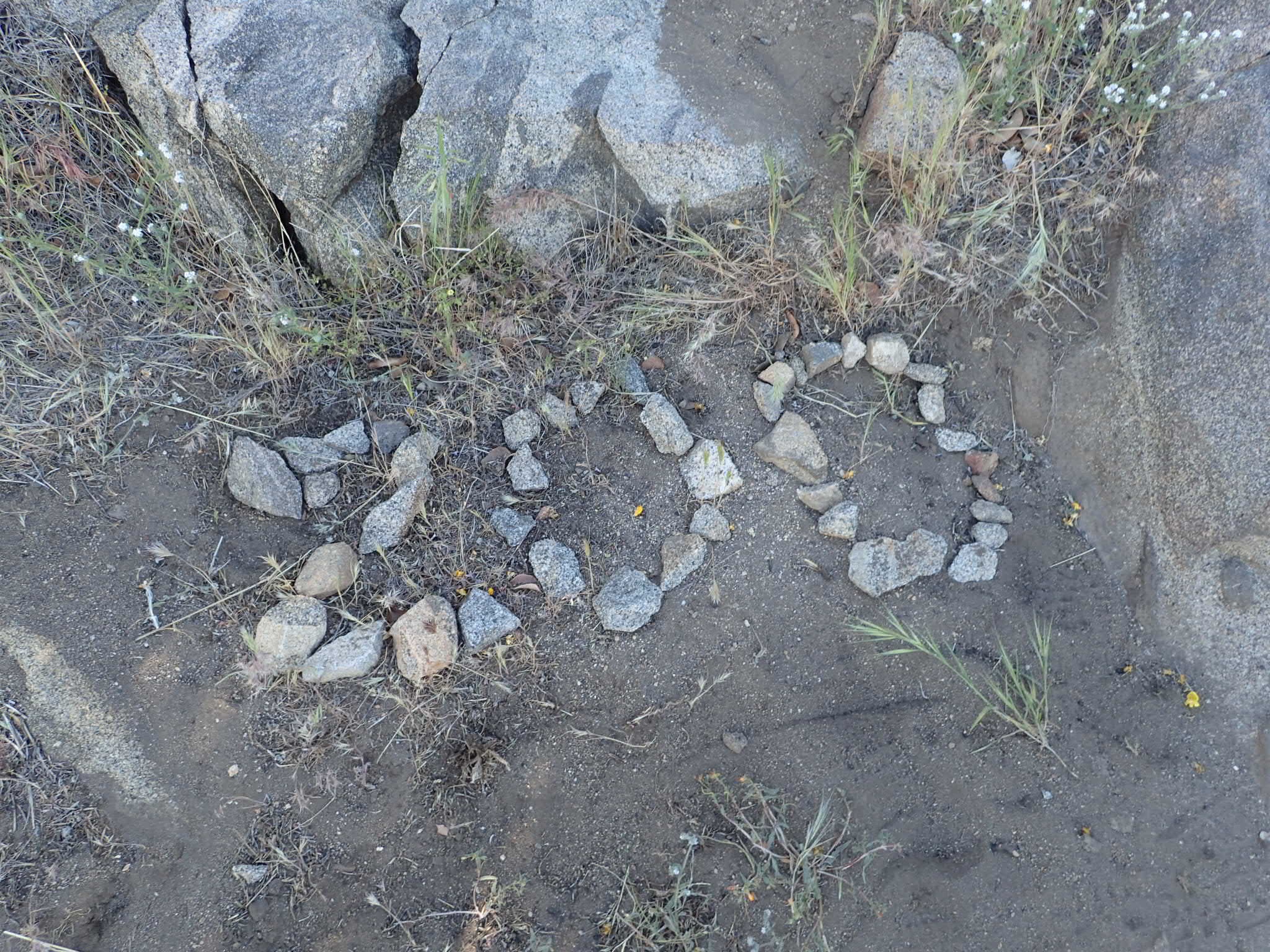 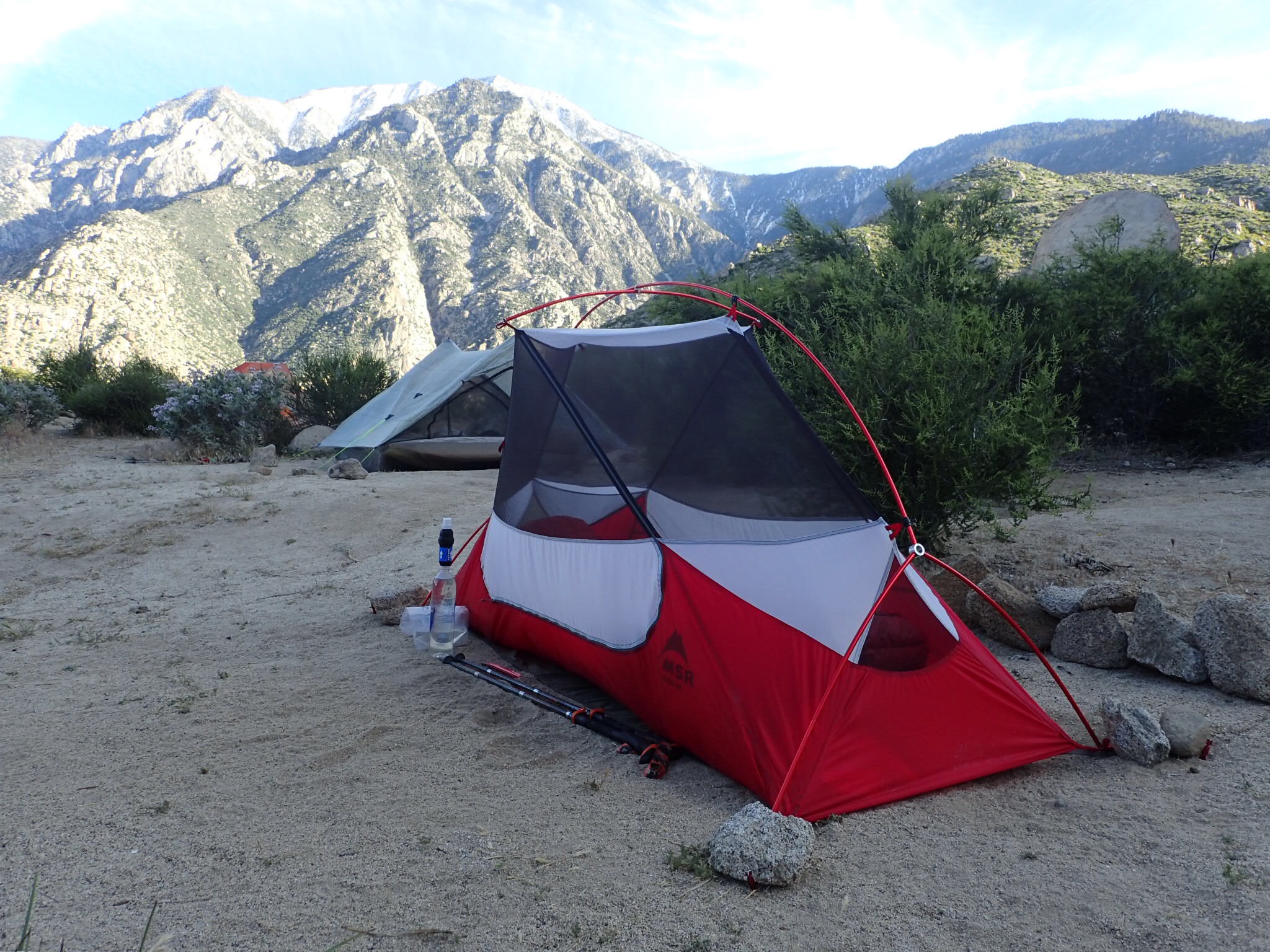 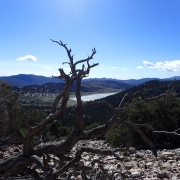 Day 78: Welcome to the Washboard

PCT day 7 – Into the desert
Scroll to top