It was 6 am when I opened my eyes and I realized I had to get moving. I closed my eyes again for a couple of minutes. Maybe if I had known what kind of day was waiting for me I just would have stayed.

I packed up my stuff and walked over to Bryan. He was already busy making a campfire and having some coffee. For me it was granola, dried milk-powder, chocolate powder and some freeze-dried fruits. And some of Bryan’s coffee. We chatted for a while but then I had to say goodbye.

I filled my water bottles at Panther Creek and started climbing up the switchbacks. After a while I started missing the small family of Bryan, Kensey and the dog Harley. I blamed myself for not swapping any contact details. The trail went up and up through dense forest. Somehow the sky remained cloudy for hours. It even started drizzling… I was hoping for some sunshine at least in Panther Creek as Bryan had planned on doing some hiking with his girl. Hopefully the bad Werther was coming with me. 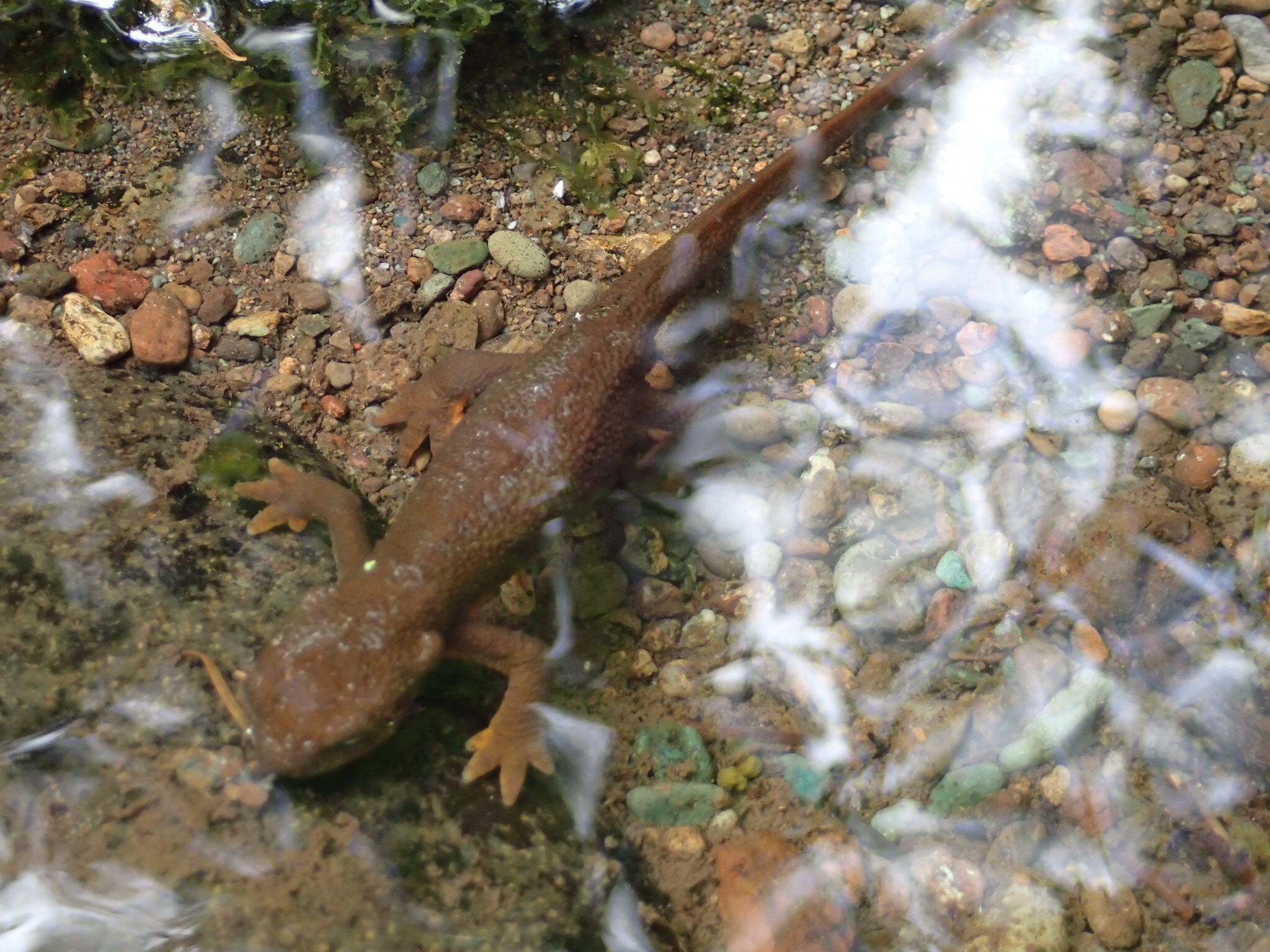 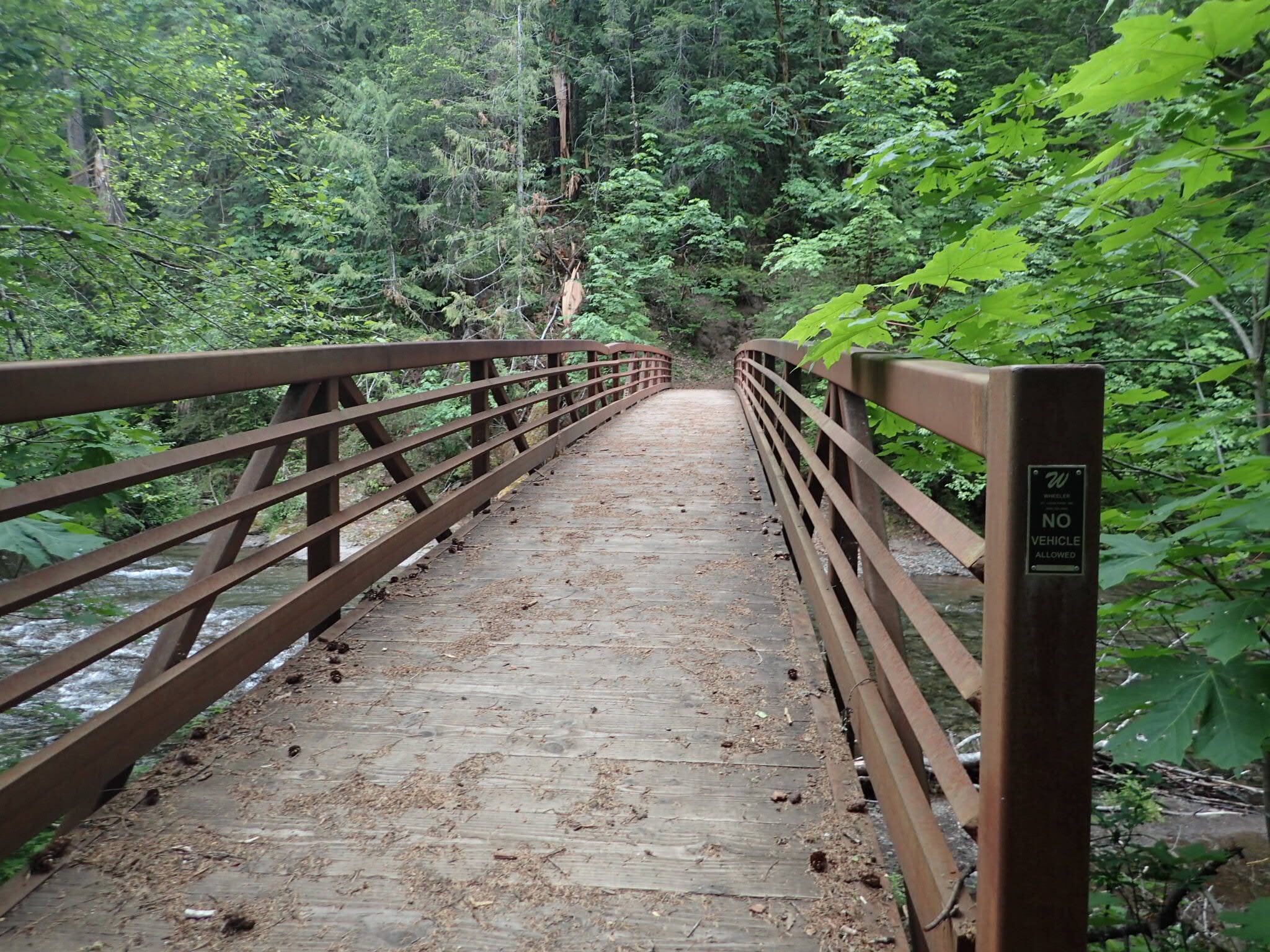 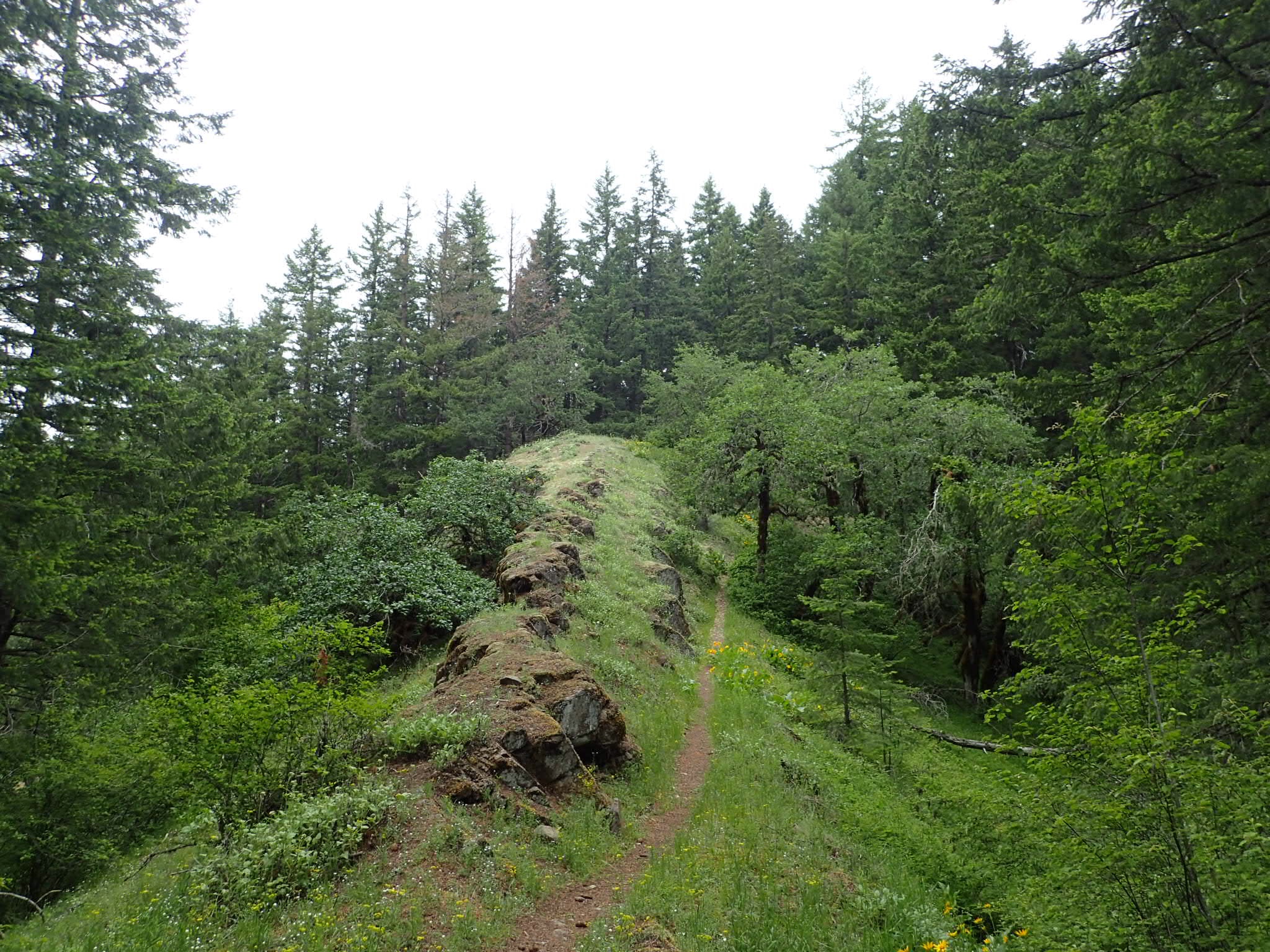 The trail stayed in forest for most of the time. After getting the climb done I aimed for a piped spring after 13 miles that was on trail. The scenery changed and to the right an old lava bed appeared. The trail even went right through it for a while and I was fascinated by the landscape. It was still drizzling and lots of mosquitoes were around. I stopped for quick lunch at a campsite trying to fight the blood suckers. 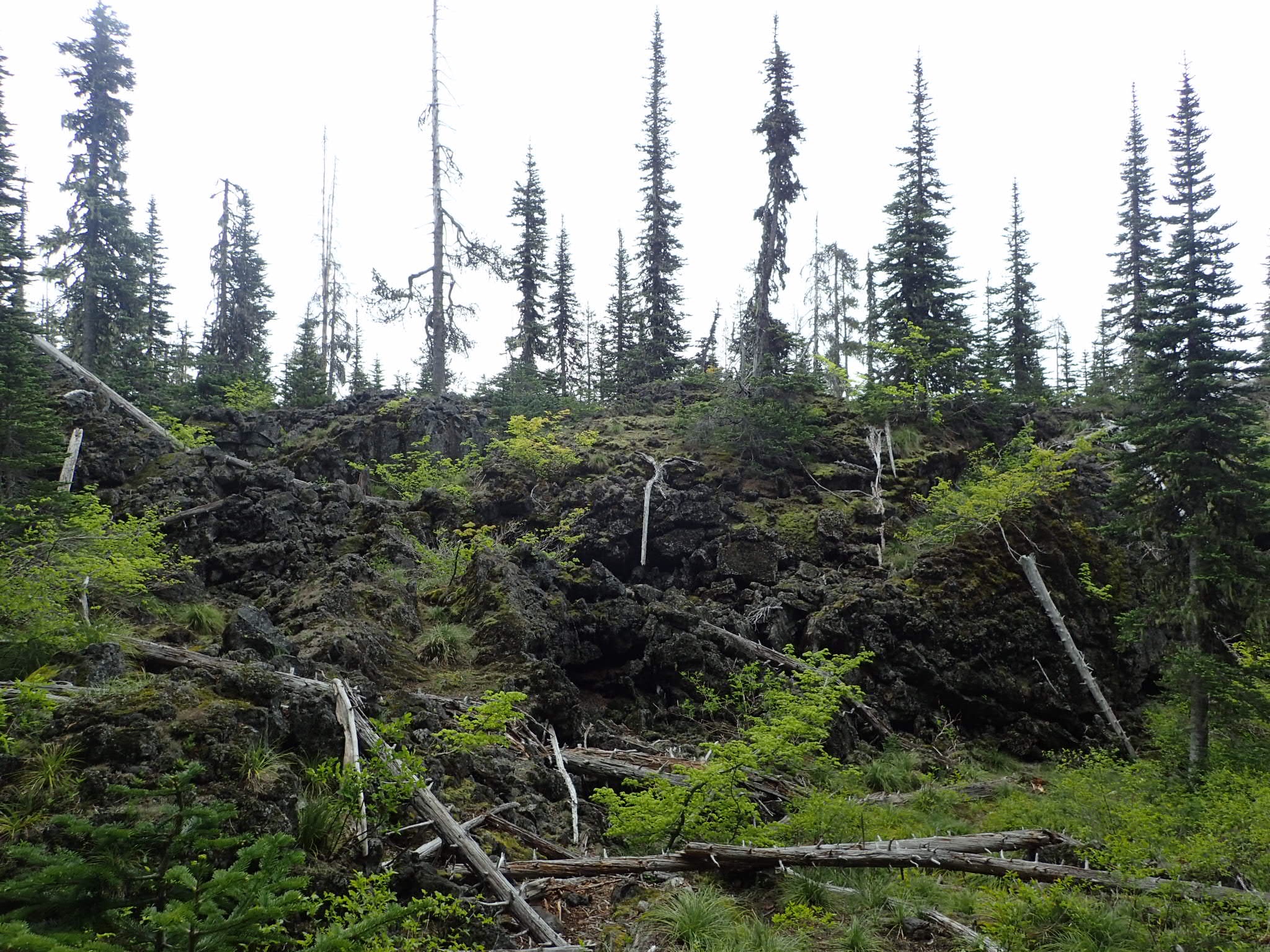 After the lava bed the trail descended into a forest again and towards a horse camp – a campsite with Picknick tables close to a road. I came close and out of nowhere a VW Bus appeared. That must be Bruises’ husband I thought and indeed the man in the bus also knew who I was. We chatted only for two minutes when Joda and Bruises arrived. I’ve had no idea that they were so close behind me. It was the end of their hiking day and I thought how nice it was to have a support team and sleep in a comfortable van every now and then. Well, I was all by myself and hiked on. From the camp it was uphill again and after a while first snow patches appeared. 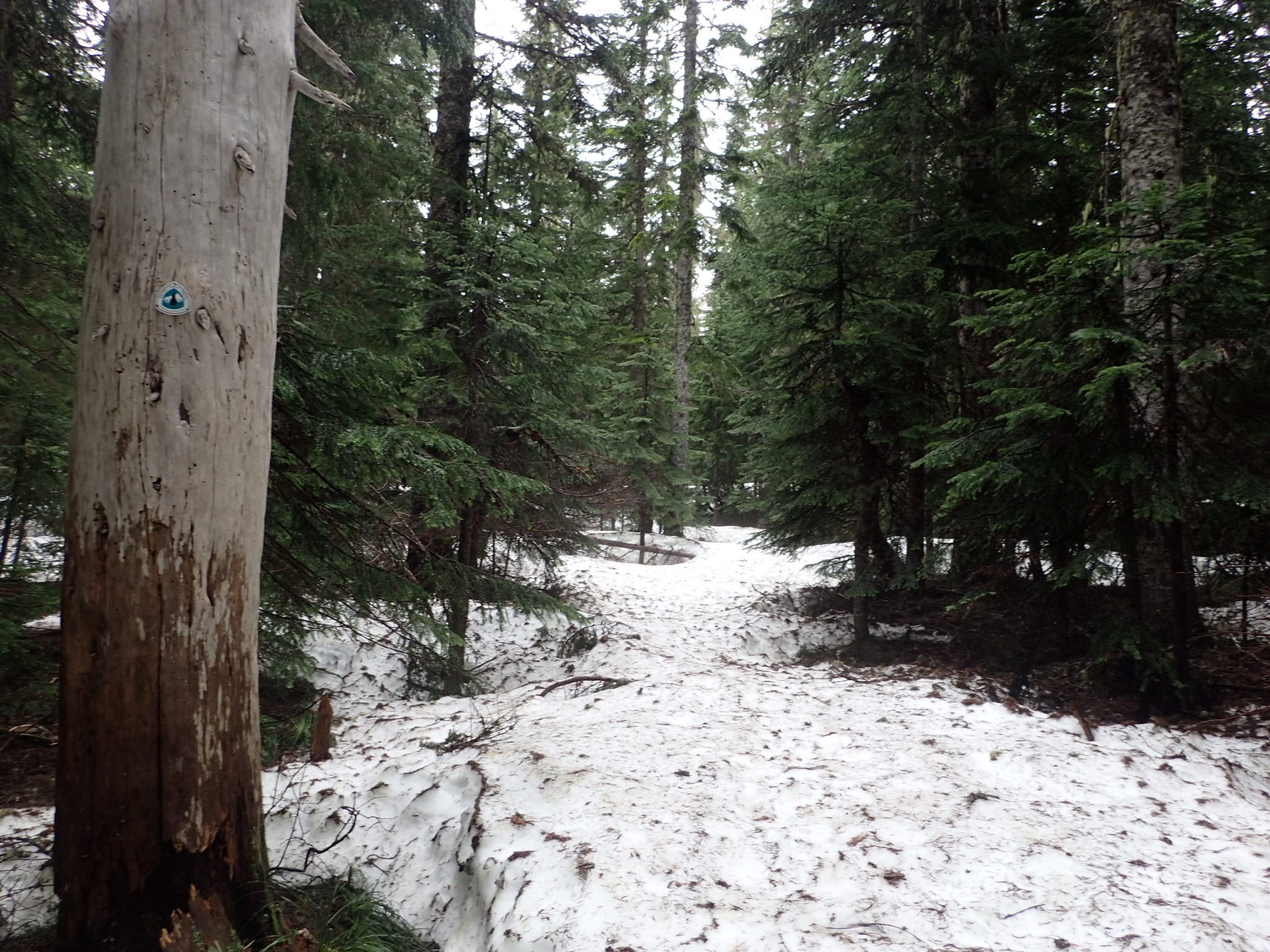 The two women and the man had been right about their snow prediction. It turned out that Springsteen had been dropped off exactly at the camp and therefore not hit the snow. However, I ploughed my way through the snow patches and hiked uphill towards the first lake. Sheep Lake was supposed to be small and I think the first lake I realized was Green Lake because there were some campsites. I hiked on following some footsteps in the snow. Actually there was only a couple of footsteps. One in my direction and one back. I was thinking about everything being wet around me and the huge amount of water from the melting snow and I was wondering how the campsites at Blue Lake would look like. I hiked on and on and all of a sudden I was standing in front of a lake. Guthook told me I was at a meadow! I shook my phone, backtracked a bit, watched for other footsteps… and finally realized that the trail was ahead of me. It was flooded! 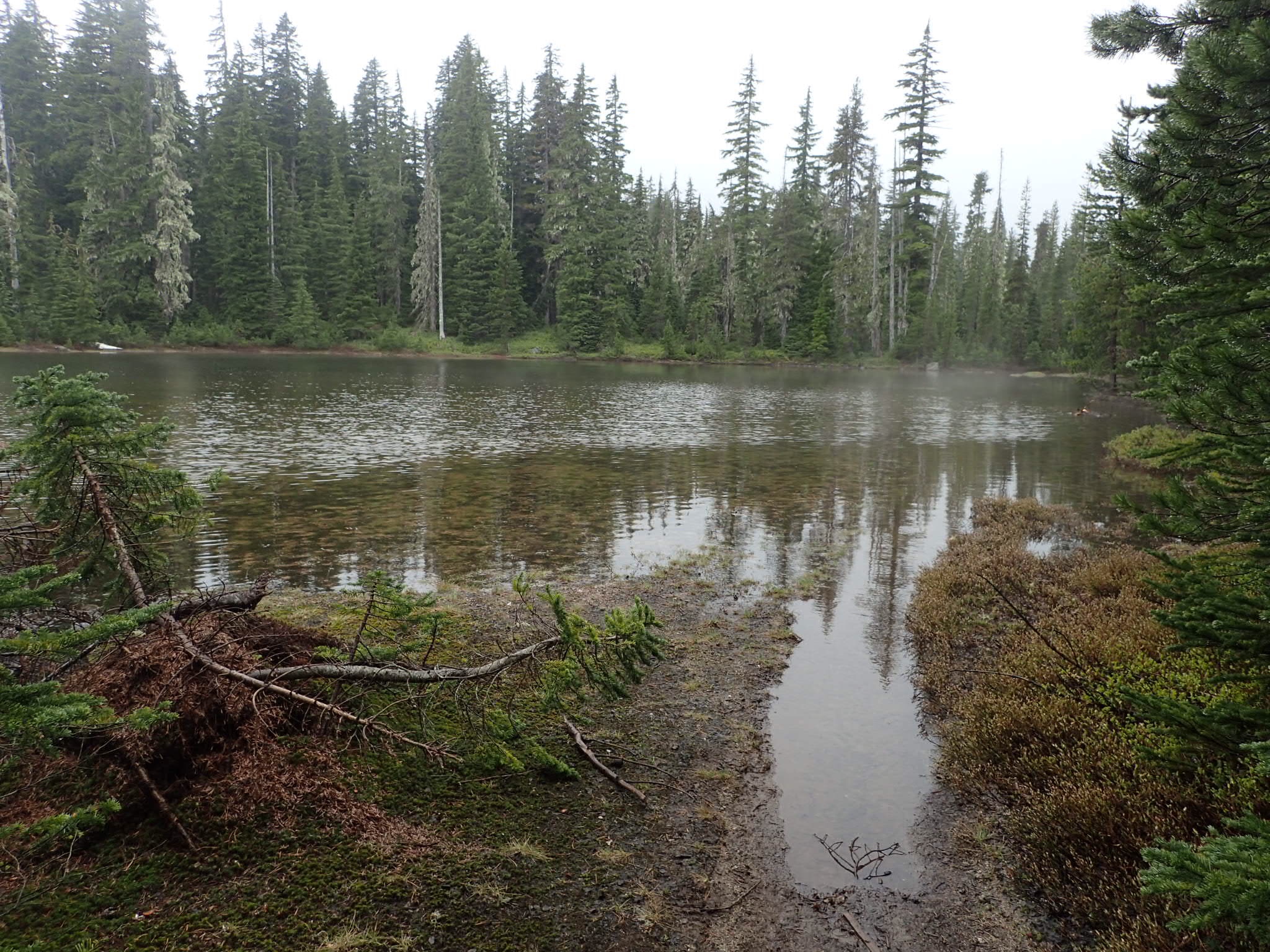 I checked for a way around but other than bushwhacking through the wet brush there was none. I decided to go for the water as I would get wet anyway. Rolling up my pants wasn’t very successful and so I was wet until over my knees when I reached a dry bit of trail again. Crazy! It was already afternoon on a not very hot day and I had just decided to get wet! My chances of drying out again were small. Hiking on I thought about dedication and stupidity. But the trail didn’t give me much time. I had to hike through snow, water again and then more snow. The hiking through snow was not too bad and it didn’t bother me apart from getting wet and cold feet. I thought about my waterproof socks – stranded at a post office in Vancouver. They wouldn’t have been of great help for the water crossing though.

Hiking higher and higher the snow patches got more and I was thankful for the footprints. Eventually they stopped and I thought that it must have been someone who turned around. Like a pioneer I tackled all upcoming snow patches and some navigational challenges where the trail was hard to find.

Descending towards Blue Lake I was seriously concerned about the condition of the camp spots. There was too much snow and water around! It was already past five and I didn’t have too many options. Just around another snowy corner and I arrived at the lake.

It was already windy and cold as I checked out the camp spots. They were better than I thought! I went a bit around the lake to find a spot that was halfway out of the wind. I set up camp right next to the waterfront and a “no camping” sign. After a day like this I didn’t care! I had checked one of the dedicated campsites and it was covered in snow. 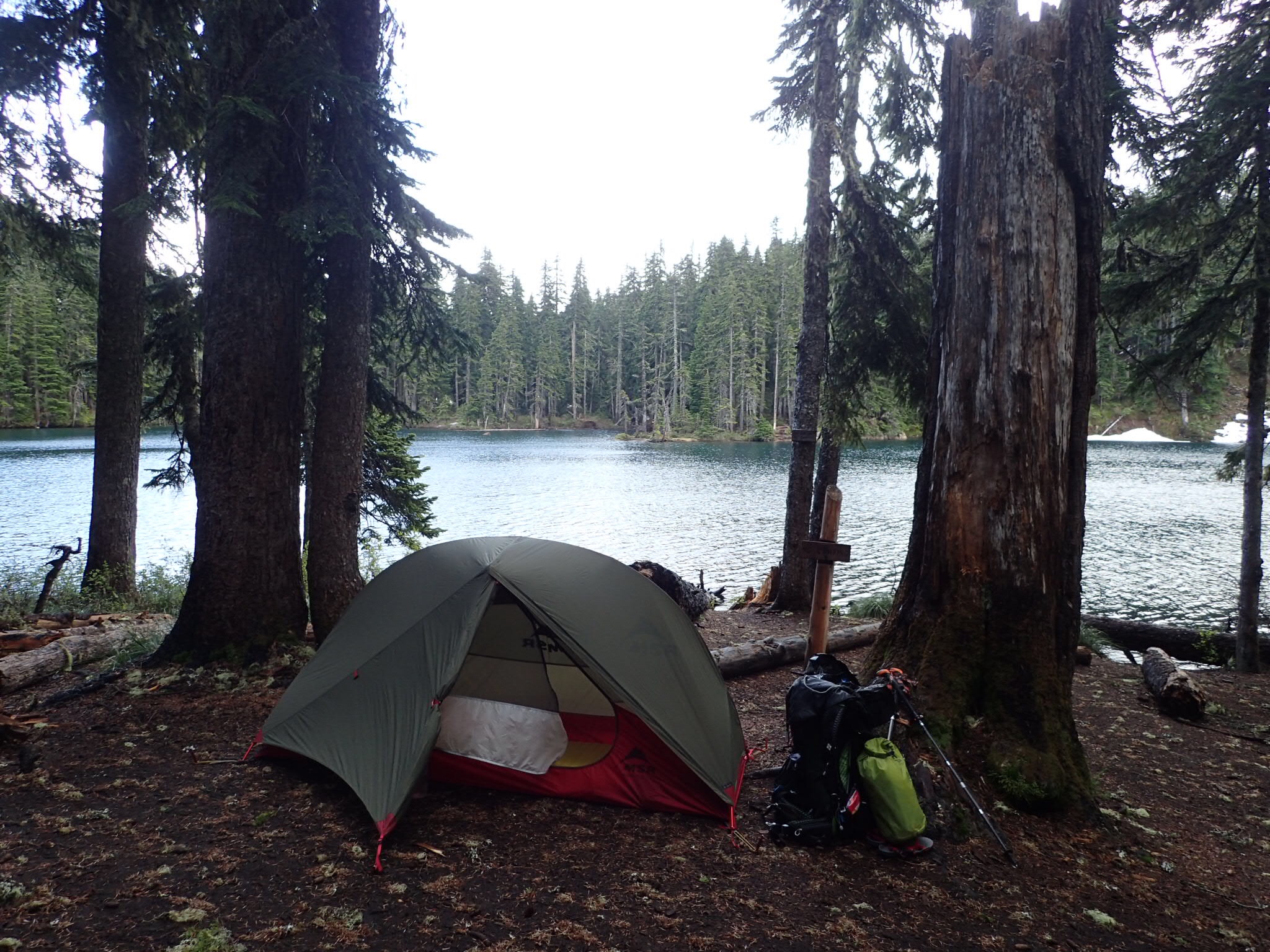 It is unbelievable but right now at 7:45pm the sky turned blue and there is a bit of sunshine on my tent! My socks and trousers are hanging outside to dry off at least a little bit! And hopefully the sun would shine again tomorrow morning. What a day! 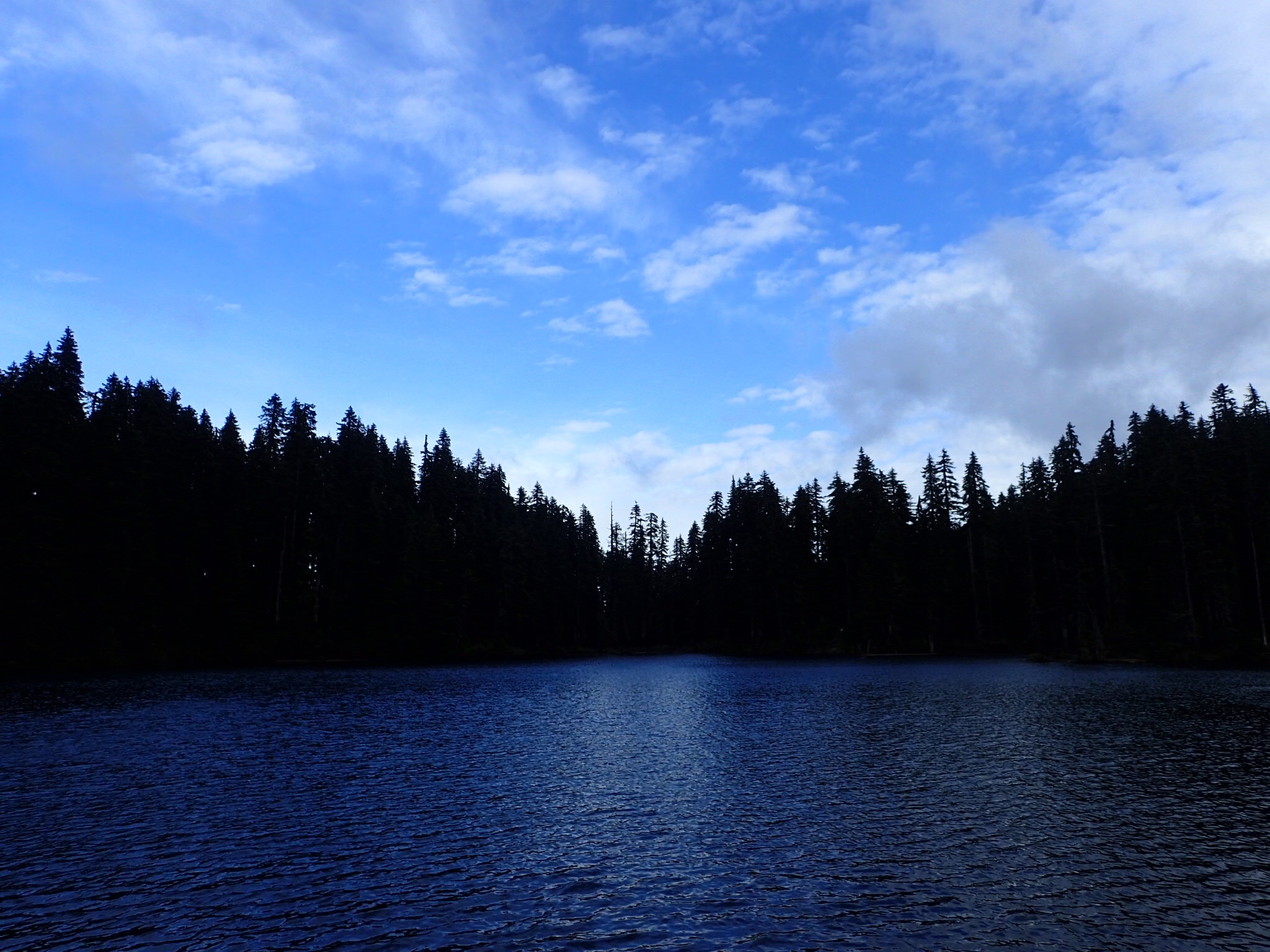 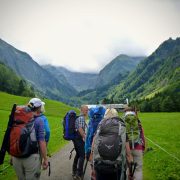 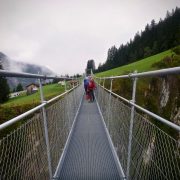